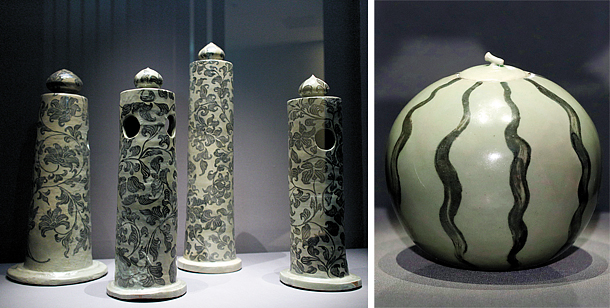 But that’s not all there is to Goryeo’s famous celadon.

People of the era who couldn’t afford high-end celadon pieces to store food, display flowers in or drink alcoholic beverages from opted for celadon made of a cheaper material: iron oxide pigment.

The pigment - which contains metal particles - could easily be obtained. It was therefore much cheaper compared to other precious paints, for instance cobalt.

This has led to the birth of a whole new art genre: Goryeo celadon made of iron underglaze.

Horim Museum in Sinsa-dong, southern Seoul, whose celadon collection is one of the best in Korea, is holding an exhibition dedicated to this sub-genre of the style.

For the latest exhibition, about 90 percent of the museum’s collection of celadon pieces made of iron underglaze from the Goryeo period is being shown. Half of the collection has never been shown to the public before.

The hues found at the exhibition are not what one might expect to see at an exhibition on Goryeo celadon.

The colors are definitely darker, murkier, and closer to beige and gray rather than the signature blue-green of Goryeo celadon.

The clay and glaze used are the same for traditional Goryeo celadon and Goryeo celadon made of iron underglaze. But the latter displays a murkier grayish tone because the soil used is not of the highest quality and the technique of baking the pottery is not as sophisticated, Horim curators explain.

Also, to decorate the surface of traditional Goryeo celadon, artists opted for techniques that required artisan skills, like carving, embossing and sanggam, which is carving patterns and filling them in with other materials.

But that was not done for Goryeo celadon made of iron underglaze which commoners used in their daily lives.

“For low-quality pottery, drawing with a brush was the best way to maximize the decoration,” Ryu Jin-hyun, the senior curator of Horim Museum, explained at the press preview held on March 20, a day before the exhibition began.

Most of the decorations were of flowers and plants, like those you would see on traditional blue-green Goryeo celadon. The original owners of these pieces may not have been the king or royals, but they certainly appreciated similar aesthetics.

The only pattern on Goryeo celadon with iron underglaze that has not been found on traditional Goryeo celadon is, according to Ryu, is the leaf of ginseng that is portrayed in a minimalistic manner on a 12-century bottle. 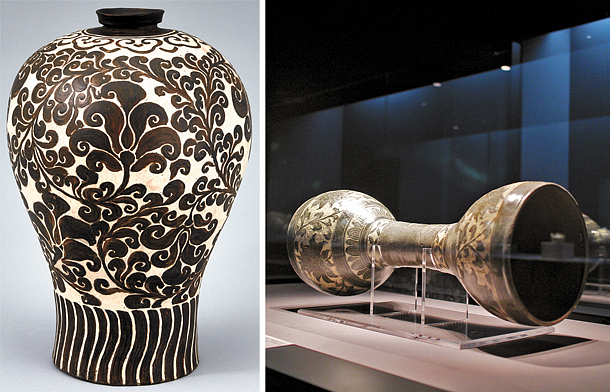 From drums to pillars

Goryeo celadon with iron underglaze may not be the masterpiece of the art form - after all, less then five pieces in this form are designated as Korea’s state treasures.

The first exhibition hall is where the highest-quality Goryeo celadon with iron underglaze is on display.

Here one of the most interesting pieces is the 13th-century bottle with ivy pattern done in the sanggam technique. It’s unique that the overwhelming ivy pattern covers the entire body and there is no glaze at all. It almost doesn’t look Korean and Ryu agrees.

“This piece is unique in that generally, Korean ceramic pieces rarely feature a pattern like this covering the entire surface,” Rye said. He added that there is a handful of ceramic pieces found in this time period without glaze or with partial glaze, which appear to have been an experiment of artisans of the times.

Also on display is a set of four long pillars which the curators say were perhaps used as handrails or other architectural pieces on a building. In fact, there is a record that states that Goryeo built houses with celadon roof tiles, many of which have been uncovered from archaeological explorations in modern South and North Korea.

In the second section of the exhibition, one can see how Goryeo artisans used ceramic and iron underglaze in a number of ways. There are several drums. The leather skin on both sides is missing, but curators said they were actually used to play music. Also displayed are flower pots, washbasins and tiny containers to hold makeup and hair oil.

The last exhibition offers a comparison of ceramics made of different techniques: drawing with a brush, carving or embossing and sanggam.

“We hope people rediscover the aesthetics of Goryeo celadon art through celadon pieces with iron underglaze that was not bound by rules and instead embodied free and down-to-earth spirit,” Ryu said. 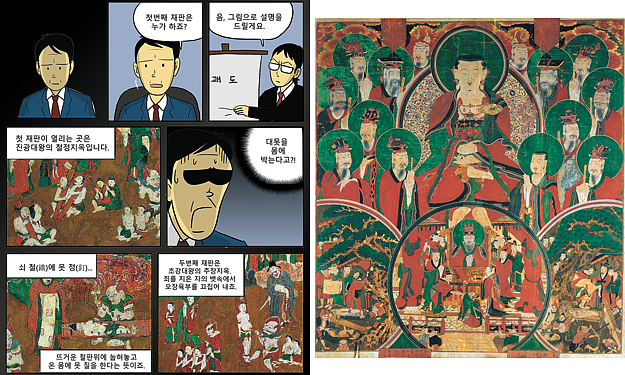 Scenes from a webtoon by Joo Ho-min titled “With God” (left) and part of an 18th-century Buddhist painting series of the Ten Kings of Hell.[HORIM MUSEUM]

Horim has also organized another interesting exhibition where its 18th-century Buddhist painting series of the Ten Kings of Hell are shown together with scenes from the famous webtoon by Joo Ho-min, titled “With God.”

“Koreans are familiar with religious paintings of Catholicism, but not so familiar with those of Buddhism,” Lee Jang-hoon, a curator with Horim, explained why Horim used webtoon for an exhibition of ancient art, as the first private museum to do so.

“Through the collaboration with webtoon ‘With God,’ we hope people appreciate Buddhist art in an easier and more fun way, and read ancient people’s thoughts on life and death,” he added.

Ten Kings of Hell refers to the kings that judge the sins of the dead and determine the type and severity of punishment as well as how they will be reborn in their next life. The paintings that depict the Ten Kings of Hell in Buddhism were introduced in Korea during the Unified Silla period (668-935).

The exhibition, titled “Meeting the Ten Kings of Hell with the Webtoon ‘With God,’” is designed so that visitors actually feel like they are undergoing the judgement and punishment of each king as they browse around.

There are known to be about 300 depictions of the Ten Kings of Hell around the world.

Most of those in the collections of Korean museums are from between the 18th to the 20th century. Those made of ten canvases and were made before the 19th century are rare. But the one in Horim’s collection, and displayed for the exhibition, is from made of ten canvases and made in 1764, thus considered a rare and important cultural heritage item.

Both exhibitions run until Sept. 30 at the Sinsa-dong branch of the Horim Museum. Admission is 8,000 won ($7.18) and 5,000 won for students and seniors to either or both exhibitions. It is close to Dosan Park in Sinsa-dong, near Apgujeongrodeo Station on the Bundang line, exit 5. The museum opens from 10:30 a.m. to 6 p.m. but is closed Sundays. For information call 02-541-3523 or visit www.horimartcenter.org.