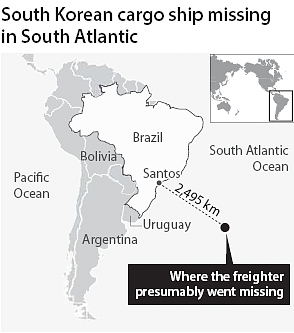 A Korean cargo vessel went missing Friday night in the South Atlantic near Uruguay after making a distress call to its local operator saying the ship was “swiftly tilting” - only two crew members among eight Koreans and 16 Filipinos have been rescued so far.

The two people who were saved are Philippine nationals, according to Korea’s Ministry of Foreign Affairs. Authorities said they reported the case to their maritime counterparts in Uruguay, Brazil and Argentina, and were seeking help through them because Korea does not hold jurisdiction over the area. The ship is believed to have capsized, said the ministry.

The Filipinos were rescued Saturday night by four commercial ships, including one Maltese and one Korean, which were passing near where the ship issued its last signal, according to the Foreign Ministry. Brazil agreed to mobilize a C-130 military aircraft to help out in the mission. The plane took off at around 11:10 a.m. Sunday and arrived at 4:40 p.m.

The 266,141-ton Stella Daisy, operated by the Busan-based Polaris Shipping, left Guaiba, Brazil, on March 26 equipped with 260,000 tons of iron ore, headed for Qingdao in eastern China. The ship was supposed to arrive in the Chinese coastal city on May 6.

At 11:20 p.m. last Friday night, as the ship reached 1,550 miles southeast of Brazil’s Santos, a crew member messaged the Polaris Shipping in Korea through the smart phone app Kakao Talk to say that water was suddenly filling the vessel and that it was “swiftly tilting” toward the direction of the leak. The operator replied moments later asking the crew to give a call, but did not receive one, according to the shipping company, which publicly revealed the discussion. The two Filipinos who were rescued were on a life raft when four commercial ships found them Saturday night. Korea’s Foreign Ministry said it was told by the two survivors that the ship had abruptly turned left and started sinking. Minutes later, sea water poured in, they attested.

Eight Koreans and 14 Filipinos remain unaccounted for. The captain and sailors were all Korean nationals.

The Ministry of Oceans and Fisheries said it organized an emergency team of around 20 experts for the case, led by the chief of the ministry’s Maritime Affairs and Safety Policy Bureau. The Foreign Ministry and also the Public Safety and Security Ministry are helping with rescue operations and contacting foreign governments.

“We’re not sure whether any other people were on the life boats,” said an official from the Foreign Ministry, “or whether the boats actually worked properly during the accident.”