Choi Da-bin thanks Yuna for mentorship

Choi Da-bin thanks Yuna for mentorship 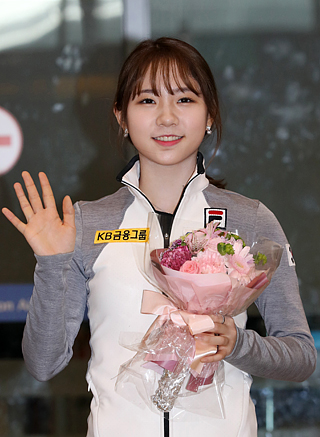 By finishing 10th overall, Choi also clinched two spots for Korea in the ladies’ singles at the 2018 PyeongChang Winter Games. Skaters finishing in the top two at the world championships bring home three Olympic tickets, while those finishing from third to 10th each earn two Olympic berths for their countries.

Upon returning home from Finland, Choi, the only Korean in the ladies’ singles there, said she was feeling so much pressure that she “nearly cried” after completing her short program.’ 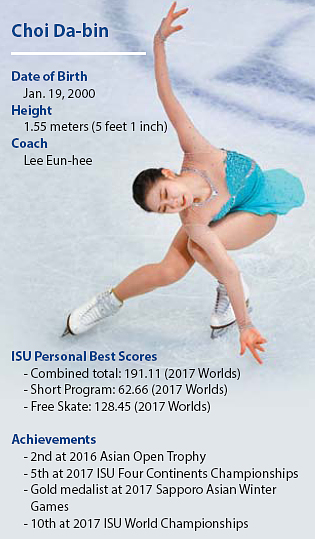 “After I finished my free skate, I didn’t even look at other skaters and just waited for everyone to finish,” Choi told reporters at Incheon International Airport. “And when I heard I’d finished in 10th place, I was extremely happy.”

By setting a new personal record, Choi now owns the second-highest score by a Korean female skater, after the 228.56 points by Kim.

And Choi said Kim has been of great help along the way.

“She has been giving me advice on my jumping and breathing techniques,” Choi said. “After this competition, she congratulated me on my result.”

Choi had an excellent finish to the 2016-2017 season. In February, she finished fifth at the ISU Four Continents Figure Skating Championships in Korea with the then-personal best score of 182.41 points. She broke that mark with 187.54 points to win the gold medal at the Sapporo Asian Winter Games later in February.

Choi became the first Korean figure skater to win an Asian Games gold then, but said Tuesday the world championships were still “the most important competition of my career.”

“I was even happier (at the worlds) than at the Asian Winter Games,” Choi said with a smile.

Though she brought home two Olympic tickets, Choi herself isn’t guaranteed a spot. She has to go through the national team trials like everyone else this summer.

“I’ll try to address my shortcomings in every element, be it jumps, spins or steps,” she said. “My skate boots have been loose since the Four Continents and I’ve had to tape them to perform. I’ve been fortunate not to have made mistakes, and I’ll have to fix that during the offseason.

As for her new programs, Choi said she won’t take any risks and will instead focus on fine-tuning what she can do best.