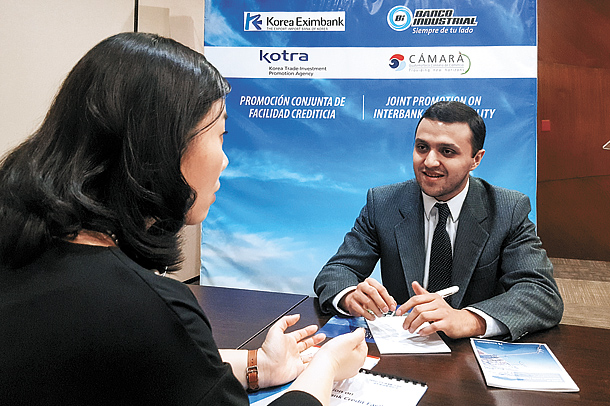 The Export-Import Bank of Korea (Korea Eximbank) held an event in Guatemala to promote its Interbank Export Loan service, in which local companies and branches of Korean firms can receive loans to import Korean goods and services.

While Korea Eximbank itself does not have overseas branches, the service allows it to finance small and midsize projects, with foreign banks acting as conduits for the loans.

Korea Eximbank invited 70 importers of Korean products and Korean companies to Banco Industrial, the biggest commercial bank in Guatemala, to talk about the loan service. The Korean bank established the $30 million service with Banco Industrial in December. Expectations are high that Korean companies will expand to Latin America after Korea struck a free trade deal with five Central American countries including Costa Rica, El Salvador, Honduras, Nicaragua and Panama.

In addition to promoting the loans, Korea Eximbank provided consulting on how to apply for them. The event was co-hosted by Korea Eximbank and the Korea Trade-Investment Promotion Agency’s office in Guatemala and sponsored by the Guatemalan Korean Chamber of Commerce.

“Guatemala has big potential,” said Lee Un-ho, Korea’s ambassador to Guatemala. “We hope to bolster trade and investment between the two countries.”

“Korea and Guatemala may be physically far away, but we have a close relationship,” Banco Industrial CEO Diego Aragon said. “Hopefully, our country will join the FTA like the other five Central American countries and have a more cooperative partnership with Korea.”

Last year, Korea Eximbank signed a memorandum of understanding with the Korea Trade-Investment Promotion Agency to jointly market its loan services. They have been co-hosting events for local importers and Korean companies operating in Mexico, Vietnam, Panama, Peru and Turkey.