Skywalkers are no longer ‘forever second’

Skywalkers are no longer ‘forever second’ 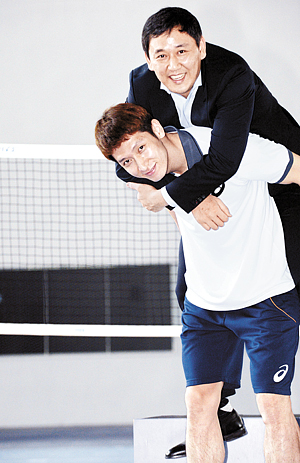 After the Cheonan Hyundai Capital Skywalkers won the postseason championship, Moon Sung-min, captain and right attacker, ran to Choi Tae-woong, manager of the Skywalkers, and gave him a hug while others celebrated.

“Choi was the only person I could think of when our team won the championship,” Moon said during the interview on Tuesday in Cheonan. “I was thankful for Choi for trusting me.”

The Skywalkers have always been known as the “forever second” team, finishing behind the Daejeon Samsung Bluefangs. But for the first time since the 2006-07 season, the Skywalkers won the postseason championship. Once Choi got appointed as the new manager in 2015, the Skywalkers became a new team.

Choi lowered the team’s dependency on foreign players and strengthened the players’ defensive and offensive skills to have every player involved throughout the game. As a result, the Skywalkers won the regular season last year, and this year, they won the postseason.

Moon was in the center of the Skywalkers’ achievements over the two years. Moon, who previously played volleyball in Germany and Turkey, is by far the best domestic player in the V-League. But due to frequent injuries, he wasn’t able to perform an active role on the court and was rated as a “half-player.” While Moon struggled, Choi awakened him. 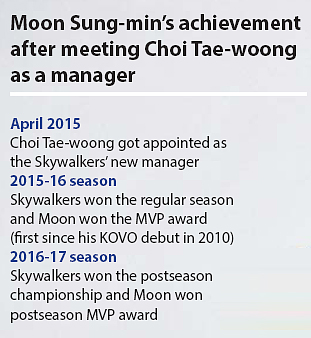 “We first met each other as roommates when we were on the national team ten years ago,” Choi said. “He was a type of person that didn’t express his feelings so I tried talking to him a lot.”

Upon completion of the 2015-16 season, Choi and Moon went on a three-day trip together and during the season, the two frequently went for a coffee and talked to each other.

“I was a player with big ambition,” Moon said. “I always had a thought that I had to take care of everything. But when manager Choi told me to look around at other players, that’s when I realized others were working as hard as I was and take some pressure off.”

Choi is well-known for his soft leadership. When he calls for a time-out during a game, rather than telling the players what to do, Choi encourages them and help them stay positive throughout the game.

However, after the Skywalkers lost the first postseason game, Choi criticized Moon for the first time, calling him weak.

“I criticized him because I really wanted Sung-min to exceed his limit,” Choi said.

“Choi never gets angry at us,” Moon said. “He would tell us to go spend time with our family while he only gets two to three hours of sleep analyzing strategies. So when he criticized me, it hit me harder. If he didn’t say that, I wouldn’t have been able to get myself back into the game.” 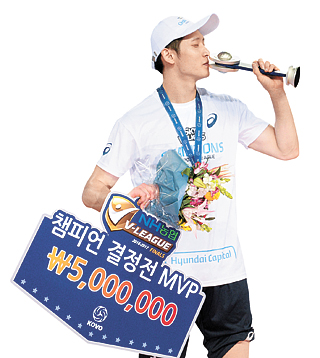 Moon Sung-min, right attacker for the Skywalkers, kisses the MVP award trophy. With the win, the Cheonan Hyundai Capital SKywalkers are no longer a “forever second” team. Right, Moon, bottom, is carrying Choi Tae-woong on his back. [KIM SUNG-TAE]

“When I was a player, I thought I had to get harsh on myself to win a game,” Choi said. “Rather than getting harsh on them, I told the players to enjoy the game. And in postseason games, they did 120 percent.”

After watching Choi coach the team, Moon now also dreams of becoming a manager after he retires as a player. Originally, Moon planned on leaving the court for good once he retired.

“I’ll never be able to become a manager like Choi,” Moon said. “As of now, I want to play for the Skywalkers, for Choi, until after I am 40 years old.”

“As a manager, my score would be 40 out of 100,” Choi said when asked about his goals after the championship. “I need more experience, and if possible, I want to win as many championships as possible.”