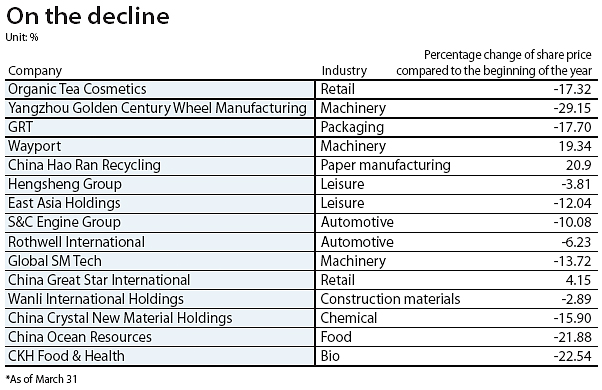 Analysts said that China’s growing middle class would drive demand for more diverse types of fish. So keen were investors that they plunked down over 1 trillion won ($881.8 million) in advance payments before the listing.

After the hype came reality: The company has been accused of false disclosures and substandard auditing practices. Korea Exchange, operator of Korea stock markets, suspended trading of China Ocean Resources earlier this month until it responds to rumors of dodgy audits - an echo of China Gaoxian Fibre Fabric Holdings, a textile manufacturer that was delisted from the Kospi in March 2011 - only two months after its listing - because of fraudulent audits.

The flameout of a few Chinese companies in Korea is giving a bad reputation to other China-based companies listed on the Kospi and the secondary Kosdaq, pushing down share prices across the board.

Local analysts are talking about the “China discount” on stocks and even “China phobia.”

“The major factor behind the low valuations lies in the delisting of Chinese players,” said Park Jong-sun, a researcher at Eugene Investment & Securities. “Investors’ doubts remain high after the Gaoxian scandal.”

Seven companies based in the Greater China region have been delisted. Three of the delistings were voluntary while four were kicked out due to failures to meet listing requirements.

A total of fifteen Chinese companies remain listed on the two trading boards, but only one, Yangzhou Golden Century Wheel Manufacturing, is trading above its initial offering price.

This year, their share prices suffered from the Seoul-Beijing row over the deployment of the Terminal High Altitude Area Defense, a U.S. led-antimissile defense system.

The price of CKH Food & Health, a China-based bio company, plunged 22.54 percent as of March 31 compared to the beginning of this year while China Crystal New Material Holdings fell 15.9 percent.

Faced with less interest by the market, one company without major problems is actually pulling up stakes.

Wayport, a machinery maker, saw its share price rise 19.34 percent as of March 31 compared to Jan. 2, but it filed for delisting this month.

“Many of the companies have demonstrated irregular public disclosure practices and disregarded requests of minority shareholders, which worsened their corporate reputations,” Park said.

In response to the series of scandals, financial authorities vow to strengthen due diligence and encourage good auditing practice by foreign companies.

“The law currently allows any auditing firms to audit foreign companies listed on the local stock markets,” a source at the audit supervision division at the Financial Supervisory Service.

“But the financial authorities are pushing for a regulation that only licensed audit firms conduct the task so that we can better detect companies that alter or omit financial statements.”

The source added that the regulation can come into effect only after a pending amendment on foreign corporation passes.