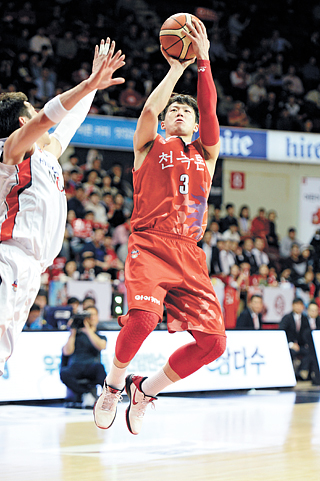 Lee Jung-hyun, guard for the Anyang KGC, attempts a shot during the game against the Phoebis on Monday. [KBL]

Lee Jung-hyun of the KGC excelled when the team needed him the most. During the first semi-final round of the Korean Basketball League (KBL) postseason championship, Lee scored 10 points in the fourth quarter to help the team win against Ulsan Mobis Phoebis 90-82 at Anyang Gymnasium on Monday. Lee played the total of 38 minutes 46 seconds, the most between the two teams.

“We’ll put aside the thought of being the regular season champion and think of the playoff games as our next challenge,” Kim Seung-ki, manager of the KGC, said prior to the game.

Although the KGC earned an automatic berth to the semi-final round by winning the KBL’s regular season and had won four of the six games against the Phoebis in 2016-17 regular season, the KGC didn’t get ahead of themselves. The Phoebis finished fourth in the regular season, but played well in the playoff games in previous years.

Despite Kim’s concerns, the KGC got off to a good start, scoring 51 points in the first two quarters. It seemed as if the KGC was easily going to win, leading by 18 points in the third quarter, but with 3 minutes and 26 seconds remaining in the fourth quarter, the Phoebis narrowed the gap to four points, led by Yang Dong-geun and Jeon Jun-beom. 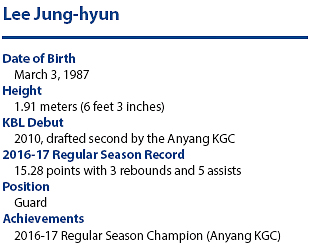 David Simon, who led the KGC until the third quarter, scoring 33 points, wasn’t able to score additional points. And it was Lee who saved the KGC from losing. Lee scored an under-the-basket shot and with Oh Se-keun successfully making a free throw in the last quarter, the KGC won the first game. Lee scored a total of 22 points with nine assists. Throughout the game, Lee ran around the court, tripped and got violent at times. He is also known for screaming during games.

“I just try my hardest in every game,” Lee said. “I can’t change my style of play. I want to be a fighter on the court.”

As KGC’s main shooter, Lee averaged 15.28 points throughout 54 regular season games. Not only that, Lee scored the most points among domestic players in the KBL and was a candidate for the MVP award. 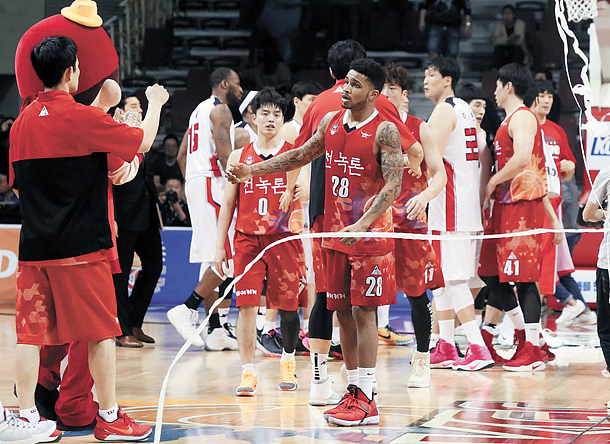 The Anyang KGC celebrates after winning the first semifinal match against the Ulsan Mobis Phoebis at Anyang Gymnasium on Monday. [YONHAP]

“He is the most consistent and faithful person on the team,” Kim said. “He can be a great role model off the court.”

“Although we won the KBL regular season for the first time in the team’s history, there won’t be much meaning to it if we don’t win the playoff series,” Lee said. “We’ll try our hardest to hold up the postseason trophy, as well.”

Based on previous records, 75 percent of the teams that won the first game in the semi-final round of the playoff series have advanced to the finals.