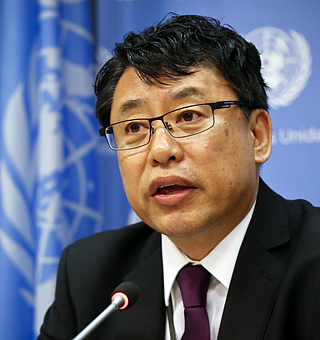 North Korea's senior diplomat said on Monday that the North will be conducting more missile tests on a "weekly, monthly and yearly basis," after U.S. Vice President Mike Pence warned Pyongyang not to test Washington's resolve.

During an interview with the BBC in Pyongyang, North Korea's Vice-Foreign Minister Han Song-ryol said if the U.S. was "reckless" enough to use military means, his country would engage in an "all-out war."

When asked what message he would give to President Trump, Han replied, "I would tell him that, if the United States encroaches on our sovereignty, then it will provoke an immediate counteraction. If the U.S. is planning a military attack against us, we will react with a nuclear preemptive strike by our own style and method."

Han added more missile tests will be held for sure.

At the UN headquarters Monday, North Korea's Deputy Ambassador to the UN Kim In-ryong told a news conference, "If the U.S. dares opt for military action," the North is "ready to react to any mode of war desired by the U.S.," according to AP.

Kim reportedly added that the Trump administration's deployment of the Carl Vinson Strike Group, which is expected to arrive in South Korea's East Sea next Tuesday, proves that the United States intends to invade the North.

The precondition for solving all the problems today on the Korean Peninsula is for Washington to roll back its hostile North Korea policy, said the deputy ambassador.

One main reason for the press conference was to "categorically reject" the U.S. decision to hold an open meeting of the UN Security Council on April 28 on North Korea's nuclear program, which is expected to be chaired by U.S Secretary of State Rex Tillerson, AP quoted Kim as saying.

During a joint press conference Monday with South Korean Prime Minister Hwang Kyo-ahn, who is acting president, U.S. Vice President Pence said the world witnessed the "strength and resolve of our new president" in the actions taken in Syria and Afghanistan over the past two weeks, and that North Korea "would do well not to test his resolve or the strength of the armed forces of the United States in this region."

Calling the communist regime "the region's most dangerous and urgent threat," Pence stressed once again that "all options are on the table."