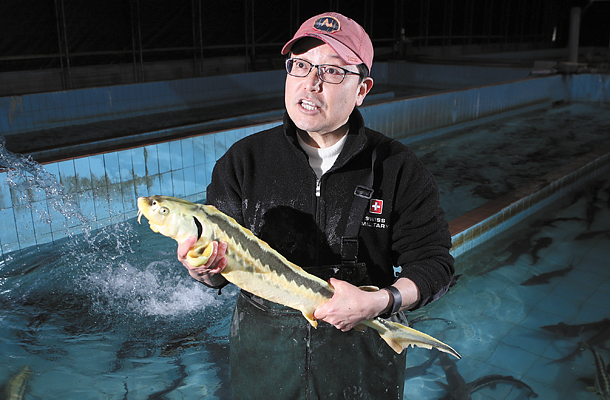 Park Cheol-hong holds a sturgeon at his Dinoville Aquafarm in Hamyang County, South Gyeongsang. Park researched the conservation of sturgeon in America and returned to Korea to begin his aquaculture venture in 2002. [SONG BONG-GEUN]

The one-star Michelin restaurant Mingles and Toc Toc, awarded Asia’s 50 Best Restaurants’ “Miele One to Watch Award,” both procure their “black gold” Ansem caviar not from the pale shores of the Caspian Sea, but from the Korean-run Dinoville Aquafarm in Baekjeon-myeon, Hamyang County, South Gyeongsang.

To harvest fresh caviar, a surgical incision in a live sturgeon’s chest is made, and the roe is then removed. The ovarian tissue and eggs are separated and cleaned, after which salt is added until it is soaked thoroughly, and only then is it packed into cans. The process takes two hours altogether, but the delicate eggs expire just three months after.

While the harvesting method varies, the traditional process is adhered to at this aquafarm due to the commitment of Park Cheol-hong, 49, head of Dinoville Aquafarm.

Park imported fertilized sturgeon eggs from Italy in 2002 and set up shop in Hamyang. He decided on Mount Jiri because clean water is paramount for cultivating freshwater sturgeon. The farm extracts water from an aquifer in the area 150 to 200 meters (492 feet to 656 feet) below sea-level.

“Surface water is influenced by the external environment,” said Park, “but the quality of the ground water brought up from deep underground is almost always consistent.”

Park’s schedule is packed. Because of the difficulty in discerning the sex of mature sturgeon at a glance, they have to be examined individually with a small incision.

After, females are nurtured in separate tanks and the eggs’ maturity must be checked. The sturgeon roe must be harvested in a specific two-week timeframe or the eggs may be re-absorbed into the body.

“You’re deluding yourself if you think raising sturgeon is a get-rich-quick business,” said Park.

At least six to seven years are required for maturation of egg-viable sturgeon, and it usually takes about 12 years to get it right. The stabilization of the caviar industry in foreign countries usually required at least 20 to 30 years.

Expecting immediate economic returns is difficult due to the present state of the Korean caviar market. However, despite this, the potential is there.

“Koreans are a people who enjoy eating pickled pollack roe and fresh fish roe,” Park said. “[Koreans] are unfamiliar with caviar, but once they know the taste, they’ll be more than enthused.”

Promoting the merits of sturgeon outside commerce and gastronomy, Park said, “There is sufficient value in the research of sturgeon in helping people, as it has a lifespan of 150 years with no inherent genetic predisposition to illness.”

Park majored in biotechnology at Pukyong National University (formerly National Fisheries University of Busan), and studied overseas in America in 1993 and researched the restoration and conservation of sturgeons at Florida State University.