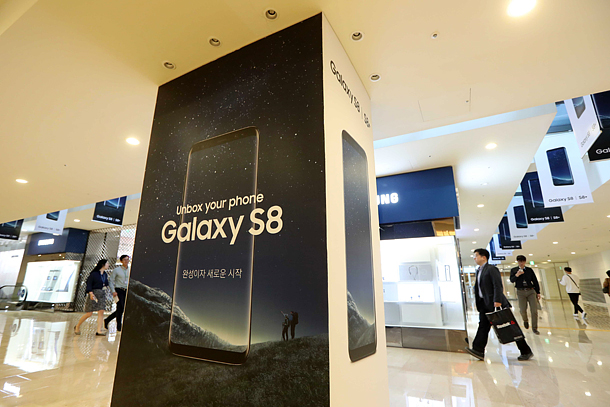 People pass by Samsung Electronics’ product promotion section at the company’s Seocho office in southern Seoul on Thursday. The tech giant announced on the same day that it posted its second-largest operating profit in history at 9.9 trillion won (8.76 billion dollar) in the first quarter, driven by strong sales of semiconductors. [YONHAP]

Samsung Electronics made a surprise announcement on Thursday that its board of directors decided not to proceed with a much-anticipated overhaul of its governance structure.

The tech bellwether released first-quarter results on the same day, which included an earnings surprise on the back of robust demand for semiconductors despite flagging performance of its smartphone business in the aftermath of the Galaxy Note7 recall and discontinuation late last year.

“The review [with external advisers] found that a holding company structure would not strengthen the competitiveness of the company’s businesses and could potentially weigh on the company’s operations longer term,” said Samsung in a statement.

It went on to say that it has “concluded the risks and the challenging environment surrounding a change in the corporate structure would not be beneficial for enhancing shareholder value and sustaining long-term business growth.” 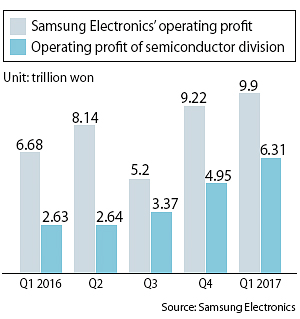 Back in November, the tech bellwether vowed to split itself into a holding company and an operating company in response to proposals made by U.S. hedge fund Elliott Management Corporation a month earlier. Conversion into a holding company was considered the most feasible option for Samsung to proceed with the 49-year-old Lee Jae-yong’s taking over of the nation’s biggest business empire from his bedridden father Lee Kun-hee.

The tech giant cited several issues raised by such a change, such as divestments of equity stakes held by the company and its affiliates, which needed the approval of the board of directors and the shareholders of each of the relevant companies and could not be implemented by Samsung alone.

Samsung also mentioned current laws that could force financial affiliates that own shares in it to divest part or all of those stakes, which could cause volatility in the company’s share price.

Even more substantial hurdles seem to have led Samsung to give up the restructuring plan. First, the conglomerate’s de facto commander-in-chief, Vice Chairman Lee Jae-yong, is behind bars as he is tried for alleged bribery and other charges. Samsung needs to concentrate on his trial for the time being.

Samsung disbanded its decades-old Corporate Strategy Office, the top decision-making body, because of its role in the bribery scandal that got Lee arrested and also led to the impeachment and removal of former president Park Geun-hye. CEOs of affiliates now have more independence in management decisions, while the so-called “governance committee” comprised of five external directors will assist them and help with communications with shareholders.

Analysts say opposition political parties’ vows to radically revise the Korean Commercial Code could also have been an issue. Some potential changes could have made a restructuring prohibitively expensive.

Robert Yi, head of Samsung’s investor relations, stressed in a conference call with analysts Thursday that Samsung has “no future plans to convert into a holding company.” At the same time, Samsung’s affiliates will work together to “tackle the issue of the complex cross-shareholding under the Samsung umbrella,” although it may take some time.

The IR head also made clear that Vice Chairman Lee never exerted undue influence in the decision not to go ahead with the restructuring.

“Unlike in the past, the review of a conversion into a holding company was conducted at the request of an investor at the end of last year and various external experts participated in the review process,” Yi said.

Vice Chairman Lee “did not have specific opinions” about the nullification of the restructuring plan.

Samsung also announced its board approved plans to cancel existing treasury shares held by the company as a sign of its commitment to enhance long-term value for shareholders. A strong balance sheet and an increase in cash holdings reduced the need to hold treasury shares, it said.

Samsung predicted operating profit will improve in the mobile business in the second quarter following the global release of the Galaxy S8 smartphone series. Earnings in the consumer electronics division will likely improve with the launch of the QLED TV and demand for air conditioners.

LG Electronics, meanwhile, announced the same day that its first-quarter operating profit jumped 82.4 percent on year to 921.5 billion won after its home appliance and air solutions division, which makes refrigerators, air conditioners and washing machines, raked in the largest quarterly operating profit in eight years. The company posted 14.66 trillion in revenue, an increase of 9.7 percent from the same period last year.