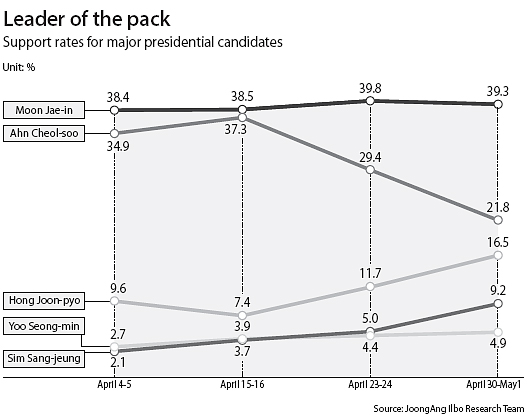 Moon Jae-in, presidential candidate of the Democratic Party, is leading among voters under 60 and in almost all regions of the country, while Hong Joon-pyo, a conservative maverick, is gaining support among older voters and in the Liberty Korea Party stronghold of Daegu and North Gyeongsang.

In the latest poll of 2,000 voters by the JoongAng Ilbo on April 30 and May 1, the decline of Ahn Cheol-soo, the candidate of the centrist People’s Party, was evident.

It is the last poll by the JoongAng Ilbo. According to election law, no new opinion poll results can be made public from today until the May 9 presidential election.

Moon scored 39.3 percent in the poll, continuing to lead the race with ever-wider margins over Ahn. Although Moon’s rating was 0.5 percentage-point lower than in the last poll conducted on April 23 and 24, Ahn’s fell far more to 21.8 percent and Hong’s rose to 16.5 percent.

Hong’s popularity was solidifying among conservative voters. Among voters who identify themselves as conservative in the previous poll, Ahn scored 33.6 percent and Hong 30.9 percent. In the latest poll, Ahn only scored 22.9 percent while Hong won 41.3 percent.

According to the survey, 72.7 percent of voters said they will not change their candidates during the remaining campaign period, while 24.7 percent said they may.

The survey was conducted by landlines and mobile phones. Its confidence level is 95 percent and the margin of error is plus or minus 2.2 percentage-points.

More details about the poll are available on the National Election Survey Deliberation Commission’s homepage.

In the latest poll, Moon scored the highest rating among voters not only in their 20s, 30s and 40s, but also those in their 50s.

He scored the highest rating in all areas nationwide except for in Daegu and North Gyeongsang, the traditional conservative stronghold known as the TK region.

In contrast, Hong scored the highest rating among voters older than 60 and those in the TK region.

Ahn’s popularity went down in other areas including Seoul, Incheon, Gyeonggi and Chungcheong provinces by about 10 percentage-points. Observers said the plummeting rating in the capital region and Chungcheong was affected by the voters’ evaluation of his performance in presidential debates.

Hong, in contrast, pulled up his ratings in Seoul, Incheon, Gyeonggi and Chungcheong. Moon also managed to keep his lead in the capital region and Chungcheong by scoring ratings around 40 percent.

“The ratings fluctuated every week depending on how conservative voters make their choices,” said Jang Deok-hyun of Gallup Korea. “The voters’ sentiments are shifting particularly rapidly for the upcoming election.”