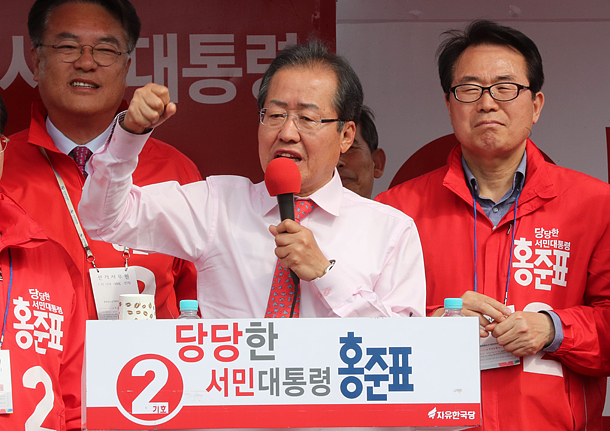 The biggest headache for the conservative LKP (LKP) lawmakers loyal to former president Park Geun-hye is not Moon Jae-in. Rather, it’s their own candidate, Hong Joon-pyo, after rumors spread that he would try to gain control of party after the presidential election. From their perspective, the party convention to elect a new leadership is more important than the presidential election.

They are baffled to learn that Hong, who only has three or four key aides inside the once-ruling party, is trying to win the chairmanship based on his popularity as a presidential candidate.

They are more concerned that Hong is trying to restore membership to 11 lawmakers who had left to establish the Bareun Party and recently abandoned it. Speculation is high that Hong, during his meeting with the lawmakers, promised he would not only reinstate them but also let them head the local chapters they had lost when they left the LKP. If this is realized, Hong will instantly win about 10 loyal lawmakers. The Park loyalists immediately responded to stop Hong’s attempt to control the party with defectors.

Rep. Suh Cheong-won, the most senior member of the Park faction, said, “There is an old saying that even a flea has a face to save.” He made clear that the defectors would be allowed to return only after agreement from party members.

Other Park loyalists said the power of key Park aides like Reps. Choi Kyung-hwan, Yoon Sang-hyun, Lee Jung-hyun and Suh must be restored before allowing the 11 lawmakers’ return. They said the party should not accept “traitors” while discriminating against loyal members who faced “unreasonable charges.” In the face of this predicament, Hong said Thursday that the party must forgive both the Park loyalists, who were criticized for colluding with presidential abuse of power, and the defectors from the Bareun Party.

But the Park loyalists did not budge. They plan to oust Hong unless he nets over 40 percent of votes in the presidential election as his predecessors had done. Hong is a fighter, but the fight against the party’s majority won’t be easy.

This is the current reality of the LKP, which controlled the country as the ruling party for nine years under Lee Myung-bak and Park. It is a political party that cares more about the party chairmanship race and next year’s legislative elections over the presidential election.

As the political survival of every individual lawmaker is somehow more important than winning the presidency, the party actually thinks it is better for Moon to win the presidential election than Ahn Cheol-soo of the People’s Party or Yoo Seong-min of the Bareun Party for its own future.

“If Ahn wins, history will turn to a new chapter for new politics,” a senior member of the Park faction said. “But if Moon wins, our argument that the Choi Soon-sil scandal was the Democratic Party’s fraud to oust Park and win the presidency will work. Based on this, we can hold a hearing at the National Assembly to go after the leftist administration and continue our fight. Then, it will be a matter of time that we regain public support. As the largest opposition party with a clear identity, we can win next year’s legislative elections. Moon and his associates are a group of incompetent people vulnerable to the temptations of corruption. Once he wins, the only path he will see is decline.”

It is far from the public sentiment that is fed up with fierce confrontation between the left and right. But the conservatives of Daegu, Busan and Gyeongsang who still support Park, and Hong’s soaring ratings in the polls, are more than enough to hypnotize Park loyalists that they still have the chance for resurrection.

The people had expectations that the far right would collapse while reform-minded conservatives and centrists will emerge as the new power.

Many experts thought the LKP wouldn’t stand a chance in the presidential election in the aftermath of Park’s impeachment. But the truth is that their power is still strong. Although Ahn and Yoo prompted reform in the conservative party, they seemed to be too weak to destroy the symbiotic cartel of regional rivalry.

At the end of the day, the people will decide the level of the country’s politics. Reform comes with agony. It is up to the people to choose whether they will endure the pain and move forward or avoid the immediate pain and hand over the burden to the next generation.