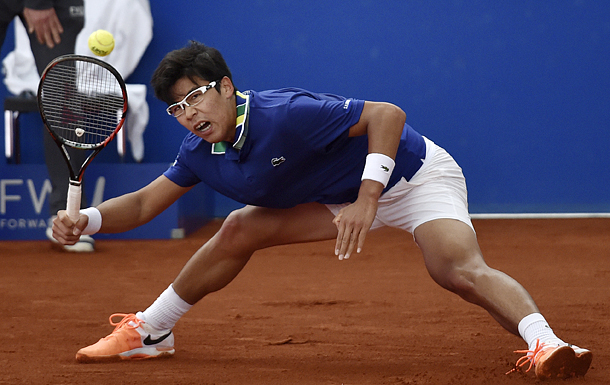 Chung Hyeon plays against Gael Monfils of France at the ATP Tour in Munich, Germany on Thursday. [AP/YONHAP]

Chung Hyeon, Korea’s tennis hopeful, lost to Guido Pella of Argentina 2-1 in the semi-final of the BMW Open by FWU in Munich, Germany, on Saturday. Though Chung came up short of advancing to the final, reaching the semi-final was the best showing at the ATP tour event by a Korean player in ten years, since Lee Hyung-taik in 2007.

Prior to his semi-final match against Pella, Chung had the biggest win of his career, winning 2-0 against Gael Monfils of France, 16th ranked player in the world, in the round of 16, advancing to the quarterfinals for two straight weeks in ATP event.

Last week, Chung lost to Rafael Nadal of Spain, ranked fourth in the world, in the quarter-final at Barcelona Open.

It seemed as if it was going to be an easy win for Chung in the semi-final, playing against Pella, who is ranked 158th in the world. Just as expected, Chung got off to a good start leading 3-0 in the first set but shortly after, Pella fought back with sharp serves to tie the game 3-3. Chung continually made mistakes from Pella’s aggressive forehand.

While tied at 3-3 in the first set, Chung’s serve went over, losing a game 30-0. But after a long rally, Chung brought the score to deuce at 40-40 and won the set 4-3. From a long first set, Chung got slower in speed in the second and third sets, losing the match.

But with a semi-final finish, Chung’s world ranking is expected to rise up to inside the top 65.

Chung turned professional in 2014 and started playing in ATP World Tour competitions in 2015, where he advanced to the final qualifying round at the Australian Open. However, until the Miami Open in March 2015, Chung played more in the Challenger tour, improving his world ranking to get inside the top 100.

When Chung won against Marcel Granollers, who was ranked 51st at the time, in the first round of the French Open, he made his name known to the world of tennis.

Chung is now back inside the top 100 and will once again try to be ranked within the top 60 this season.

Starting today, Chung will be playing in front of domestic fans in the ATP Seoul Open Challenger at Seoul Olympic Tennis Court. Rather than flying to Madrid next week, upon completion of the Seoul Open, Chung will stay another week in Korea to play in the Busan Open Challenger.

Chung will play his first game of the Seoul Open Challenger against Alexander Sarkissian at 10 a.m.

Since the field is a lot less competitive than the ATP tour events, with only three players including Chung ranked inside the top 100, it should be a good opportunity for Chung to earn more ranking points.