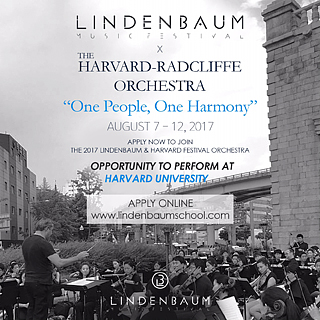 Lindenbaum is currently recruiting students for its “One People, One Harmony” music festival scheduled to take place in August. [LINDENBAUM]

Lindenbaum Music Company, headed by violinist Won Hyung-joon, has long insisted that music can bring harmony back to the two Koreas by organizing various music projects, such as an orchestra concert near the Demilitarized zone (DMZ) to mark the 70th anniversary of Korea’s independence from Japan, as well as attempting to hold a joint concert with North and South Korean musicians at the DMZ.

The latest project organized by Lindenbaum invites students who are interested in music for a week-long music festival academy titled “One People, One Harmony,” to teach South Korean students about Lindenbaum’s philosophy that “communication and harmony starts from listening to each other, and being considerate of one another.”

From Aug. 7 to 12, students will be mentored by professional Korean musicians as well as members of Harvard University’s Radcliffe Orchestra, then hold two concerts - one at the Goyang AramNuri Arts Center in Gyeonggi on Aug. 11 and another at the Camp Greaves DMS Experience Center on Aug. 12.

Its current president of the Executive Board, Yang Na-young, 18, who will be coming to Korea for the upcoming Lindenbaum Music Festival Academy as a mentor violinist, has several concentrations including Human Developmental and Regenerative Biology.

“Harvard University does not have a School of Music, and therefore doesn’t provide a Bachelor of Music degree like Julliard School for example, but the school has such a vast and varied music scene and its students, despite majoring in other fields, know the importance of music education,” said Won. “That is why I wanted Harvard students who pursue career paths other than music to talk to Korean students about their love for music and how music has helped them in many ways.”

After the two concerts in Korea, Lindenbaum will be taking the Korean students who have participated in the festival academy to Harvard University in October to hold a Peace Concert together with the Harvard Radcliffe Orchestra under the baton of Antoine Marguier, the conductor of the United Nations Symphony Orchestra.