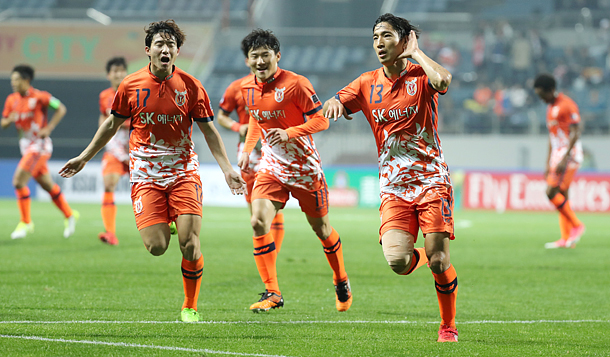 Jeju United FC won its final Group H match 2-0 against Gamba Osaka of Japan at the Asian Football Confederation (AFC) Champions League to advance to the round of 16 at Jeju World Cup Stadium on Tuesday.

With a win, Jeju finished second in Group H with three wins, one draw and two losses, totaling ten points, behind Jiangsu FC of China with 15 points. This is the first time in the team’s history that it has advanced to the round of 16.

Aside from their performance in the AFC, Jeju is also playing at its best in the K-League Classic, ranking first, and is the only team that is still continuing its season in all three tournaments - K-League, AFC Champions League and the Korean FA Cup. In its recent K-League Classic match, Jeju had a 4-0 shutout win against Jeonbuk Hyundai Motors, who won the AFC Champions League last season.

Unlike other top ranked teams in the K-League, surprisingly, Jeju does not have a single member playing on the Korean national football team or a star player. That being said, Jeju shows stronger teamwork than others, where the 21 goals scored so far this season have been scored by 11 different players. Behind the team’s success, the fans credit Jo Sung-hwan, manager of Jeju.

When Jo first joined the team in 2015, Jeju was considered one of the weakest teams in the K-League. Aside from its surprise runner-up finish in the K-League Classic regular season in 2010, they always finished their season in the lower tier. The players didn’t have set goals and when they met higher ranked teams they lost confidence.

“To make a good team, I figured I had to know what the players were thinking,” Jo said. “I tried to spend as much time as I could with the players after training.”

Jo improved all the players’ ability rather than focusing on the team’s key players, and gave equal playing opportunities to all.

In the 17 games that Jeju has so far played in the K-league this season, AFC Champions League and the FA Cup, the team never had the same line-up.

“Many people said that our team doesn’t have a star player, but to me, they are all important players on the team,” Jo said.

The same night, Suwon Samsung Bluewings played against Guangzhou Evergrande FC of China for its chance to advance to the round of 16 but failed to do so by finishing its match with a 2-2 draw. Suwon finished third in the Group with two wins, three draws and one loss, totaling nine points.

Since Suwon failed to finish within the top two teams in Group G, Jeju is now the only Korean team in the AFC Champions League.

Jeju will resume its first round of 16 match on May 24 and the second on May 31.