A look at the group that helped deliver an electoral victory

A look at the group that helped deliver an electoral victory 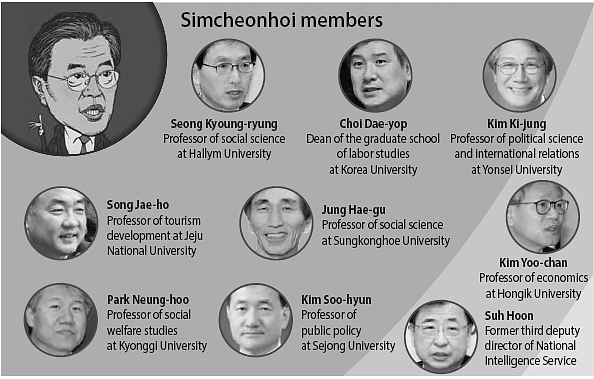 The group, which was formed in February 2013 by seven professors whose expertise range from labor studies and social science to welfare policy and public administration, has been holding monthly meetings with Moon over the past four years in order to provide him with policy guidelines.

The seven founding members include Choi Dae-yop, dean of the graduate school of labor studies at Korea University, Kim Ki-jung, professor of political science and international relations at Yonsei University, and Kim Soo-hyun, professor of public policy at Sejong University.

What first began as the 7-member group soon expanded to hold 10 members, one of whom is Suh Hoon, former third deputy director of the National Intelligence Service (NIS). Suh was tapped by Moon on Wednesday to lead the NIS.

Simcheonhoi’s members are said to have debated fiercely whether Moon should compete in the intraparty primary in 2015 to become party chairman. They concluded that Moon would have no shot at winning the 2017 presidential race without demonstrating his leadership skills as the Democratic Party leader beforehand.

In July, Moon, who by then had stepped down as party chairman and was preparing his second bid for the presidency, asked the group to form a policy think tank for his campaign. Three months later, the policy think tank, People’s Growth, was launched with nearly 500 professors as founding members. Simcheonhoi’s members assumed positions within the think tank.

The founding members then began to recruit policy experts, including Cho Yoon-je, a former lifelong diplomat and professor of international studies at Sogang University. With the think tank’s help, Moon was able to produce a new policy platform on economic growth every week since December.

Professor Kim Ki-jung of Yonsei University acted as Moon’s virtual special envoy on his visit to the United States during the race, where he informed experts of Korea policy and Moon’s stance on inter-Korea and international relations.

There is now a high chance that Simcheonhoi members will be appointed to high-level positions in the Moon administration.

“Given the fact that they’ve been helping Moon since 2013,” said one Moon aide who asked not to be named, “the members could emerge as Moon’s policy brainpower.”