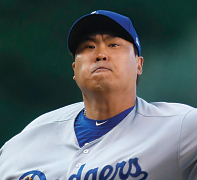 After an 11-day stint on the disabled list with a hip injury, Thursday was supposed to be Ryu Hyun-jin’s big return to the mound. Instead, he recorded his worst performance since his Major League Baseball (MLB) debut in 2013 in a 10-7 loss against the Colorado Rockies at Coors Field on Thursday.

In four innings, Ryu only had four strikeouts while giving up ten runs, eight hits, seven walks, including a hit on batter, and recording his fifth loss of the season. The loss increased his ERA to 4.99.

Shortly after Ryu earned his first win of the season against the Philadelphia Phillies on May 1, he was put on the disabled list, after injuring his hip while running to a base. Unfortunately for Ryu, his return game was against the Rockies, where he had already lost two games this season.

Ryu allowed the Rockies an early lead, giving up two runs in the first and another five runs in the second. He pitched a scoreless third inning but fell apart in the fourth, recording the MLB’s first balk in five years, which led to a tenth run.

“I didn’t know that I had to tell the referee if I wind up after pitching in set position,” Ryu said after the game.

Ryu struggled the most against Nolan Arenado, the Rockies’ third batter. In two previous games, Ryu gave up two home runs and a double to the third baseman. Once again, Aredano had a hit to right field against Ryu’s change-up in the first as well as in the second.

When the two met again in the fourth, Ryu began to throw curve balls targeting the corners of the strike zone, but ended up allowing a walk. In the loss, Ryu failed to control the ball count, allowing six walks, - the most he has allowed in his professional career. Of the total of 101 pitches, Ryu only had 57 strikes.

“He was excessively targeting the corners of the strike zone throughout the game, keeping himself aware of the home runs he gave up in two previous games,” Son Hyuk, MBC sport commentator, said.

“Though he had a bad result, the falling point of his pitches were similar to the game against the Phillies,” Son said. “He may be different next time.”