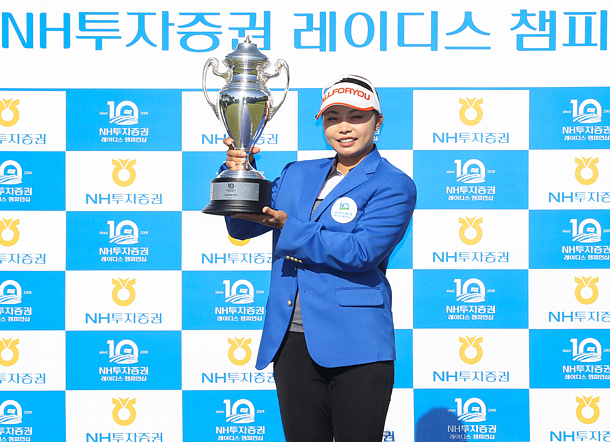 Kim Ji-young with her trophy after winning the 2017 NH Investment & Securities Ladies Championship at Suwon Country Club on Sunday. [KLPGA]

Kim shot a two-under par in the third round to finish the tournament at 11 under-par, one shot ahead of the runner-up finishers. Heading into the final round, Kim was one shot behind the leader, Choi Hye-jung, who eventually finished tied for fifth, shooting a one over par in her final round.

The tournament proved to be quite unpredictable as seven players were tied for first at one point during the final round. 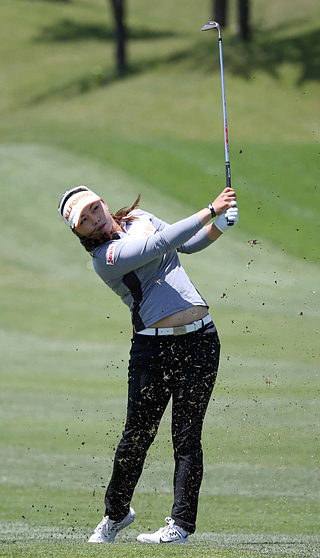 In the front nine, Kim shot an even-par, not being able to save any shots, but she started off the back nine with a birdie on the tenth, making a 3.5-meter putt. And with another birdie on the 13th, she tied for the lead with Lee Ji-hyun for the first time in the tournament.

When Lee made a bogey on the 15th, par 4, Kim pulled ahead and with a chip-in birdie on the 17th, Kim extended her lead to two shots. Kim finished her round with a bogey on the 18th, but it didn’t prevent her from winning, as she still held a one-shot lead against Lee, Kim Ji-hyun and Kim Char-young.

“I thought I had to make par to win the tournament,” Kim said after the round.

When Kim finished her round, she and her caddie didn’t celebrate, both unaware that they won the tournament. Throughout the tournament, Kim had a putting average of 29.67, par save percentage of 87.04 and 79.63 percent greens in regulation. With a win, Kim has moved up to seventh in the 2017 KLPGA money list.

Kim, who is a second year KLPGA tour professional, always came up short when it came to winning a tournament during the 2016 season.

At the 28th KLPGA Championship, she lost at the first playoff hole to Bae Seon-woo and at the Samchunli Together Open in 2016, Kim lost in another playoff to Park Sung-hyun, who now plays on the LPGA tour, and finished as the runner-up.

At one point in the 2016 season, Kim led the Rookie of the Year race but ended up finishing fourth. She finished 15th on the KLPGA tour’s money list and 27th in scoring average.

At the end of the 2016 season, Kim focused on gaining muscle in her off-season training. She gained 20 yards and is now considered as one of the long hitters on the KLPGA.

“My goal this year is to win three tournaments,” Kim said. “Last year, I missed the Rookie of the Year award but this year, I’ll try to finish first among the players who are in their second year.”

Up next, the KLPGA will tee off at the 2017 Doosan Match Play Championship at Ladena Resort starting from May 17 to 21st.