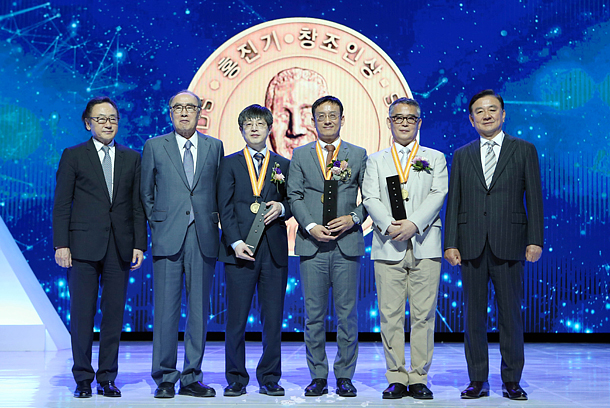 Recipients of the 8th annual Yumin Awards gather at Hoam Art Hall in central Seoul on Monday. From left are SaKong Il, adviser to the JoongAng Ilbo; Lee Hong-koo, former prime minister and current chairman of the board of the Yumin Cultural Foundation; Kim Jin-soo, director of the Center for Genome Engineering at the Institute for Basic Science and a chemistry professor at Seoul National University (recipient of science); Choi In-cheol, associate editor of the Personality and Social Psychology Bulletin, a psychology professor at Seoul National University and the director of the school’s Center for Happiness Studies (recipient of society); Moon Young-dai, an art critic (recipient of culture); and Hong Seok-hyun, former chairman of the JoongAng Ilbo and JTBC. [KIM SEONG-RYONG]

The eighth annual Yumin Awards were held at Hoam Art Hall in central Seoul on Monday, where three people were awarded for having advanced their respective fields in science, society and culture.

Kim Jin-soo, 52, director of the Center for Genome Engineering at the Institute for Basic Science and a professor at the Department of Chemistry at Seoul National University, was awarded in the category of science for his use of the CRISPR-Cas9 protein, otherwise known as “genetic scissors,” in excising fragments of the human genome in 2012.

The applications for Kim’s genetic scissors range from the trivial to potentially eliminating human immunodeficiency virus from a cell’s genetic code.

Choi In-cheol, 50, associate editor of the Personality and Social Psychology Bulletin, psychology professor at Seoul National University and the director for the university’s Center for Happiness Studies, was the recipient of the award in the category of society for his actions as a proponent of happiness with the publication of the “Happiness Textbook” in 2011.

Choi’s work has involved near a million students and acts to combat depression. South Korea’s happiness index has plummeted to the bottom of the Organization for Economic Co-operation and Development (OECD) with suicide rates consistently at the top of the world.

Moon Young-dai, 57, an art critic, was the recipient of the award in the category of culture for his scholastic contributions regarding Byun Wol-ryung (1916-90), the socialist realist painter and ethnic Korean who was integral to the development of visual art in North Korea. Moon’s research sheds light on the differences and similarities between South and North Korean art.

The Yumin Awards was established by the nonprofit Yumin Cultural Foundation in 2010 in memory of Hong Jin-ki (1917-86), co-founder and former chairman of the JoongAng Ilbo, who was active in government, business and media during the founding of the country and throughout its industrialization.

“As opposed to existing prizes that award achievements of generations past,” said former Prime Minister Lee, “this prize focuses on the younger generation’s future possibilities in the transformation of human civilization.”