Football player wants to score goal in every game he plays

Football player wants to score goal in every game he plays 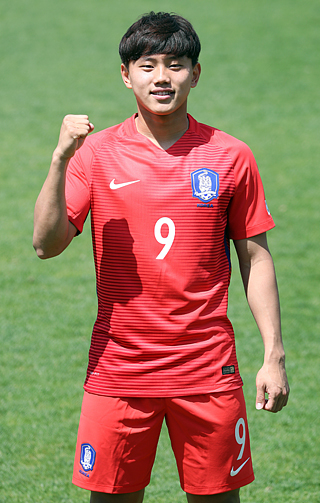 PAJU, Gyeonggi - Cho Young-wook might not be the most well-known player on the South Korean squad for the FIFA U-20 World Cup, but he might be the player with the greatest ambitions.

As the main striker for the host nation of the U-20 World Cup, Cho wants to score goals in every match he plays. At the 24-team tournament, which kicks off on Saturday, South Korea is in Group A with Guinea, Argentina and England.

“I always think about scoring one goal in every game I play,” Cho said Monday after a group photo session at the National Football Center in Paju, north of Seoul. “After I score a goal, then I go for the second one.”

Cho scored a goal and set up another in South Korea’s final U-20 World Cup tune-up against Senegal, which ended up with a 2-2 draw on Sunday. He notched the opening goal when he slotted the ball into the empty net following Senegal goalkeeper Lamine Sarr’s poor clearance.

Cho’s performance against Senegal was praised by many football pundits, one of them including former Tottenham Hotspur left back Lee Young-pyo, who now works as a commentator for local broadcaster KBS. During the commentary, Lee said Cho penetrates his opponents’ defenses like Cameroon striker Samuel Eto’o, who is best known for his days with FC Barcelona and Inter Milan.

It was a compliment that Cho will never forget. The Korea University freshman said he often goes online to see the clip of Lee’s commentary.

“It just feels good whenever I hear Lee compare me with Eto’o, so I kept watching the video over and over again,” he said. “I know what kind of player Eto’o is and it makes me work harder.”

Cho, who will wear the No. 9 jersey at the U-20 World Cup, knows there are still many things to improve. He has so far scored five goals in 19 matches for the U-20 side, a tally that isn’t much impressive for a striker. In fact, his goal against Senegal was his first in four months for the U-20 team.

“I still have to improve my fitness before entering the U-20 World Cup,” he said. “I need to make more aggressive movements to score goals.”

Born on Feb. 5, 1999, Cho is the youngest player on the South Korean squad. On the pitch, he is usually flanked by two FC Barcelona prospects - Paik Seung-ho and Lee Seung-woo - who are older and more popular than Cho, but Cho said he doesn’t want to be just a part of the supporting cast at the U-20 World Cup.

“In the past, I thought I just needed to support Paik or Lee,” he said. “But not these days. I feel I now need to lead them because I’m in the center. I feel proud that I’m playing with Barcelona players on my side.”

Cho said personally the U-20 World Cup is important because he also wants to play with foreign clubs like Paik and Lee. The U-20 World Cup is the first major international competition for Cho, as he failed to feature at the 2015 U-17 World Cup despite winning the scoring title at a national tournament in 2014.

“My dream is to play in Europe,” he said. “If I show good performances at the U-20 World Cup, there will be a way.”

Cho said he now feels attention from fans as his number of social media followers is increasing.

“I just feel thankful to my fans, I know I have to play really well at the World Cup,” he said. “We beat South American champions Uruguay and African qualifying winners Zambia this year, so everyone is confident. We are preparing for the World Cup without any fear, and we’re ready to play.”