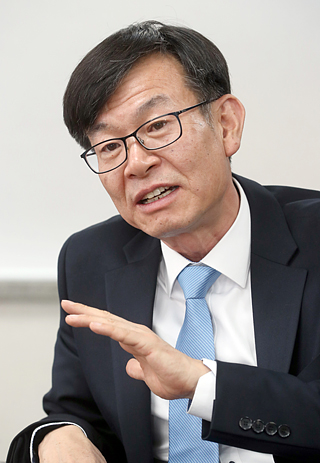 The five major candidates for the presidential election on May 9 all showed active support for economic democratization, a reflection of the disappointment and anger people felt toward Park over the past four years.

The candidates showed support for introducing multiple derivative actions, enabling shareholders of a parent company to file lawsuits against the executives of its subsidiary, as well as an electronic voting system.

Kim Sang-jo, a 55-year-old economics professor at Hansung University, is a key scholar linked with economic democratization. As chair of Solidarity for Economic Reform, a civic organization, he has been dedicated to enhancing the corporate governance system through minority shareholder campaigning. He has worked toward chaebol reform following Korea’s financial crisis in the late 1990s and contributed to improving laws related to corporate governance.

The JoongAng Ilbo sat for an interview with Kim, who had advised Moon on economic policy, at the party headquarters in Yeouido, western Seoul, on May 9, the day of the election.

Q. Why did you go from being a civic activist for 20 years to politics?

A. I agonized over this greatly, but my expertise may help the new administration carry out reforms.

You have no personal ties with President Moon Jae-in?

We just sometimes brushed by each other or had discussions publicly, at seminars and such. But at the end of last year, his camp asked to meet Prof. Kim and myself, saying he wanted to speak to us about the economy. We met downtown and talked for two hours. Afterward, we met four more times over a week. It was like a group study that came to a total of 10 hours.

Why did he ask to meet?

While he takes pride in being a “prepared president,” he was not confident on economics, especially economic democratization. He had questions about whether Kim Chong-in’s economic democratization, arguing that chaebol profits should be shared with the people and small and medium-sized enterprises, could be successful. He showed awareness of a sense of crisis, that should things proceed in this manner, both the Republic of Korea and Democratic Party could fail.

How did you respond?

Kim’s economic democratization was created in the late 1980s, during the economic boom. It was an era when all the conglomerates reaped in excessive profits. Economic democratization is the idea of sharing such money, essentially employing an adjusted trickle-down effect. The voice of the finance sector grew stronger, and there was concern that economic authority controlled the government, so the notion came about that the president has to regulate chaebol.

This would be difficult to apply to the current situation?

It’s a different era. Growth itself has slowed. Chaebol that bring in such profits are a minority. The gap in size has also widened — the assets of the top four conglomerates is half those of the top 30. Companies below the top 10 are struggling to stay afloat. In such a situation, will it be effective to force them to share their profits? I, myself, though considered a sniper of chaebol, have begun to have questions.

The term is too deeply connected to Kim Chong-in, but a much more updated version is evenly incorporated.

The standard of the economy and market has become higher.

To an extent that you can’t even compare to 30 years ago. Movement of minority stockholders, foreign shareholders and the national pension appeared. We are in an era where chaebol reform can’t happen just through presidential reform. We need to respect the strength of the market. Forcing a regulation will only make standards ambiguous. It will not be effective on the top chaebol, and there is a high likelihood it will only result in overregulation for lower-ranking chaebol.

Is that why Moon during his campaign said he will focus on the four major, or top 10, conglomerates?

That is right. The day before he made such remarks, I told him such things, and he received it well.

But will it be possible to supervise chaebol without new regulations?

Improving corporate governance structure is an issue for all listed companies. There will be improvements for the economy and capital market if parts of the commercial law are fixed and a stewardship code, or set of guidelines for exercising shareholders’ voting rights, is adopted.

President Moon promised he will put jobs first, but chaebol reform may shrink conglomerates and have the opposite effect, right?

The president worried about this the most. Economic democratization has to makes companies more competitive and improve the livelihood of the people. It has to be linked to the creation of jobs. That is how people will support it. The president recognized that the end goal is not chaebol reform but to create a better economy.

Moon’s pledge to create 810,000 jobs in the public sector earned some controversy.

Job creation is an urgent issue. The government and the private sector have to head down a two-track path. It is irresponsible for the government to stand back and say it is the role of the private sector. There is a slowdown in growth and the fourth industrial revolution is in progress. Even if exports and the rate of growth increase, jobs cannot help but decrease under the current structure. It’s an era where university enrollment rates have reached 90 percent and employment continues to become more difficult. The government has to play a buffer role until this is alleviated.

How will jobs in the private sector be increased?

We need to play a leading role in responding to the fourth industrial revolution… start-ups and new industries have to be cultivated and there is a need to bolster the competitiveness of existing manufacturers. I believe that it is especially important to strengthen mutual cooperation between small and medium-sized companies.

Roh aimed for value, even if feasibility was low. President Moon is a pragmatist. That is why I compared the two to Steve Jobs and Tim Cook.