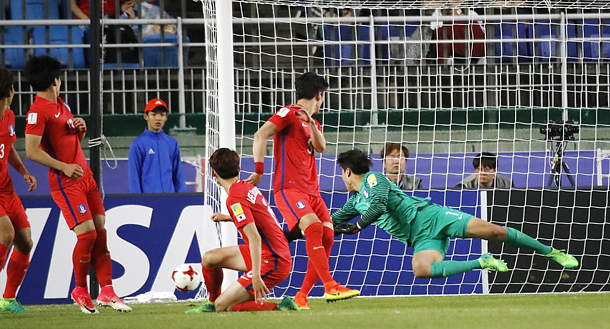 Korea squeezed into a second-place finish in Group A at the FIFA U-20 World Cup on Friday after losing to England 1-0 at Suwon World Cup Stadium in Gyeonggi.

The berth means Korea will next face Portugal, second in Group C, in the round of 16. Korea was the first among 24 teams to secure its spot in the round after winning their first two group matches against Guinea and Argentina. It has two wins and one loss, totaling six points.

During the team’s game against England on Friday, Head Coach Shin Tae-yong opted for a so-called plan B, allowing his Barcelona duo Lee Seung-woo and Paik Seung-ho, who have been part of the starting lineup, to rest for upcoming matches.

This gave an opportunity to other players who had not yet participated in a game to test their skill on the pitch. Rather than a 4-2-3-1 or 3-4-3 formation used in previous matches, Shin opted for a 3-5-2 formation with six new faces on the field.

Shin put two strikers, Cho Young-wook and Ha Seung-woon, up front and stacked five midfielders in the starting lineup, but it wasn’t enough to replace the skill of Lee and Paik. England broke a 0-0 tie at the 56th minute with a goal from Kieran Dowell.

A minute after that, Korea ended up substituting Lee and Paik into the game, but they were unable to score any goals. Song Bum-keun, Korea’s goalkeeper, turned out to be the best player of the day as Dowell’s goal was the only one scored. It would have been a bigger loss for Korea if Song wasn’t there.

“Our players did their best,” Shin said after the game. “They played a great game, but I do feel bad about our loss. Starting with the round of 16, it’ll be a tournament. We’ll prepare for the match thinking that it is a final game.”

Elsewhere in Group A, Argentina wiped out Guinea 5-0 to finish third with one win and two losses, totaling three points.

The top two teams from each group, six groups of four, earn an automatic berth in the round of 16. The top four teams finishing third will be given a spot based on points, goal difference and number of goals scored in all group matches.

Korea has managed to survive one of the toughest groups in the tournament, but now, they have a bigger challenge ahead of them against Portugal. Shin had hoped to play against Iran in the round of 16, but Portugal took him by surprise finishing second in Group C.

The U-20 Portuguese football team led by Emilio Peixe is considered a strong one in the field, winning the FIFA U-20 World Cup twice in 1989 and 1991. Korea has not won a single match against Portugal, tying three and losing four. In their most recent faceoff at the 2013 FIFA U-20 World Cup in Turkey, they played to a 2-2 draw. And when Korea played a friendly match in Portugal for offseason training in January, it was another tie, at 1-1.

But since Lee of Barcelona Juvenil B wasn’t playing during Korea’s friendly match, it’s hard to make any predictions about their upcoming game.

Although Korea may feel a lot of pressure playing a team they’ve never won against, the fans’ cheers might be a source of encouragement for the players.

“As soon as Korea’s round of 16 match venue was confirmed to be the Cheonan Sports Complex, which can hold up to 25,814 fans, the tickets were sold out,” the Korea Football Association said Sunday.

This is the third time that tickets have been sold out for a U-20 match in which Korea is playing (the first two were against Guinea and England). The country is hosting the FIFA U-20 World Cup for the first time, and games are being played in Cheonan, Daejeon, Incheon, Jeju, Jeonju and Suwon.

The match against Portugal will kick off at the Cheonan Sports Complex in South Chungcheong on Tuesday at 8 p.m.