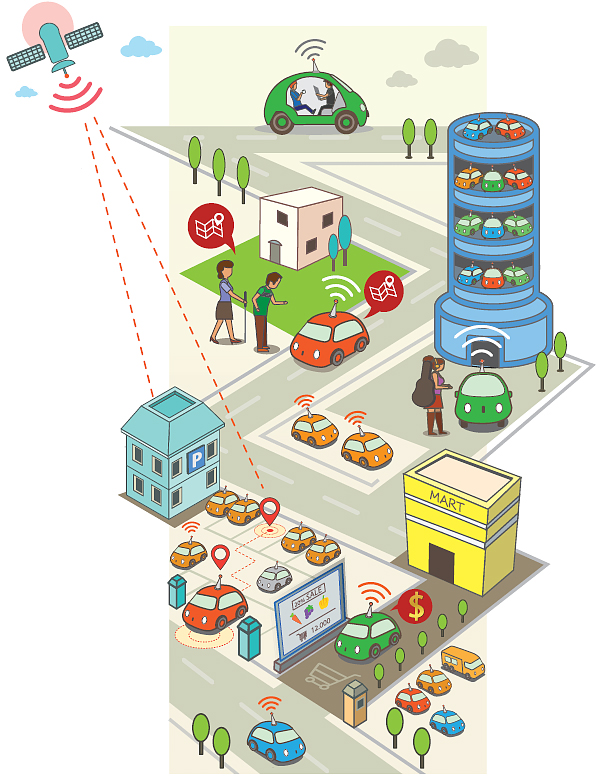 The vehicles used by Korean car-sharing start-up J’Car are like a playground for automation.

First, it only requires two knocks to open the door. All a driver needs to do is tap around the door handle twice, and the car will verify the driver’s identity via smartphone and unlock the door.

The automated functions don’t stop there.

To control air quality inside the car, the vehicle can close the window by itself before entering a tunnel. It can also memorize the best seat position and side mirror location for each specific driver, and adjust them automatically to provide the best view and safest driving experience.

Though it may sound like the technology in a prototype, the car is actually already available to the public through Gwangju-based car-sharing start-up J’Car. The company has 10 electric cars with technology developed by Tuneit, a start-up affiliated with Hyundai Motor, and plans to add six more to its fleet by the end of the year.

“Today’s car is like a 2G phone,” said Song Young-wook, a senior research engineer at Hyundai’s in-house start-up team and founder of Tuneit. “By connecting auto parts and making them organically work together by communicating with each other through signals, the car becomes a smartphone.”

The automotive industry stands at the forefront of what has been known as the fourth industrial revolution. Economist Klaus Schwab, who coined the term, said autonomous cars are among the key technologies driving revolutionary changes in various fields.

“In the auto industry, the revolution is being driven by the convergence of connectivity, electrification and changing customer needs,” said Mary Barra, chairman and CEO of General Motors. “I believe the auto industry will change more in the next five to 10 years than it has in the last 50.”

According to a market report by Boston Consulting Group, 12 million fully autonomous vehicles are expected to be sold annually by 2035. In addition to that, 18 million partially self-driving vehicles will be sold per year, making up approximately 25 percent of all vehicles on the road.

Individual ownership of cars, which has dominated the automotive industry for the past 100 years, will likely go away as a concept. A recent study by RethinkX estimates that by 2030, 95 percent of miles driven in the United States will be done by on-demand electric self-driving cars owned by a ride-hailing or car-sharing company.

A car that communicates

Before the industry can achieve a fully autonomous vehicle, the connected car must be realized, according to a report by PricewaterhouseCoopers.

“At present, even the smartest cars are pretty dumb,” PwC said in its “Connected Car Report 2016” released in September. “Advances in artificial intelligence and machine learning promise to change all that.”

Tuneit is working to blur the line between one’s daily life spent inside and outside the car. The Korean start-up founded in 2014 specializes in so-called Internet of Things technology, which allows physical objects that might not otherwise be considered digital to be connected to the internet.

“I wanted to enable customization of a car through IoT technology,” said Song Young-wook, founder of Tuneit. “Just like various home appliances are connected through a central hub and can be remotely controlled and be all connected, various parts of a car can function in similar ways when wearing IoT technology.”

The company has four functions available in shared vehicles offered by the start-up J’Car, and the technology is being considered for Hyundai Motor’s mass-produced cars in the future.

Owin, another Korean start-up founded in 2015, created a device that lets drivers make payments without ever having to leave the car. The device, no bigger than a thumb, can be plugged into a cigarette lighter and connected to a payment method like credit card, membership card or discount card.

The device assigns a specific ID number to the car and communicates with nearby stores through a wireless signal to process payments. This means a driver could fill up gas, order coffee or shop for groceries from inside the car and then simply pull up to a window to pick up the order.

In 2015, Owin was selected by the Google Cloud Platform program as the first Korean start-up to receive funding of $100,000 and technical support.

Drivers of the new Peugeot 3008 SUV scheduled to go on sale later this year won’t even need to buy the device. The service will be embedded inside the vehicle itself, and the center console will include the option of paying for purchases from inside the car.

“By expanding partnerships with a complete carmaker, the service will become more and more simplified,” said Shin Sung-chul, co-founder and CEO of Owin.

A car that drives itself

Once connectivity is ensured, the competition shifts to sensors and cameras that act as the car’s eyes. They, too, are fundamental elements for developing a fully autonomous vehicle.

In Korea, Hyundai Motor and a Seoul National University research team have the upper hand in the driverless car race. Samsung Electronics and Naver have also recently jumped on the bandwagon.

The Society of Automotive Engineers, a U.S.-based nonprofit studying advanced mobility technology, standardized the level of automated driving into six grades, from Level 0 with no automation to Level 5 with full automation.

Hyundai Motor successfully demonstrated Level 4 technology at the Consumer Electronics Show earlier this year in Las Vegas. It pledged to introduce a Level 5 completely autonomous car by 2020 and commercialize it by 2030.

Most of the partially autonomous driving technology equipped in mass-produced vehicles at the moment fall into the Level 2 category, where the car simply assists a driver in functions like staying inside a lane or keeping a safe distance from a car. At this level of technology, a driver has to stay attentive at all times.

Tesla’s Autopilot system also falls into the Level 2 category. Its chief executive officer, Elon Musk, has said it would take about two years to develop a Level 5 vehicle.

“When considering mass-produced vehicles, Korea’s autonomous driving technology doesn’t fall behind industry leaders like Tesla and BMW by that much,” Yi said. “When it comes to electronic parts like sensors and software, Korean companies still lag behind.”

A car that belongs to everyone

The development of driverless and connected vehicles will likely lead to more demand for car-sharing services, according to a McKinsey report released last January.

“Connectivity and later autonomous technology will increasingly allow the car to become a platform for drivers and passengers to use their transit for personal activities, which could include the use of novel forms of media,” the report said.

Poolus, a Korean start-up established last year, aims to provide easily accessible on-demand mobility. The company noticed that many cars on the road only had a driver but no passenger, and Poolus wanted to provide an economic and environmentally-friendly solution to customers.

Similar to Uber, it matches registered drivers with riders that are going in a similar direction. It can be a one-on-one match but also a one-to-four match like in a carpool service. Registered drivers pick up riders in their own car.

Because of government regulations, though, the service is only available during busy commuting hours from 5 a.m. to 10 a.m. and 5 p.m. to 2 a.m. the next day.

“The commercialization of driverless cars will accelerate rising demand for on-demand mobility,” said Kim Tae-ho, CEO of Poolus. “The need to own a car is expected to diminish.”

The company says big data analysis is essential for the service to be successful. Knowing where cars are and where demand lies allows Poolus to more efficiently distribute cars across different neighborhoods. In March, the company established a center dedicated to analyzing data accumulated from customer usage and general commuting patterns. Once the service stabilizes and enough data is collected, Poolus is considering expanding the service to freight and food delivery businesses.

“The ride-sharing industry has only been around for a year, but its expansion is becoming a J curve,” Kim said. “Looking only at Poolus, we have had 1.5 million accumulated users.”

Poolus which started service in Pangyo, Gyeonggi, last May now is available nationwide. The one-year-old start-up now has 550,000 regular subscribers and matched 750,000 rides so far.

On the upbeat prospects, SK Holdings, a holding company of conglomerate SK Group, purchased 20 percent of Poolus shares on Thursday. SK Group has been keen on entering the on-demand mobility business. The conglomerate purchased 59 billion won worth of stock in Socar, Korea’s leading car-sharing start-up, in 2015.