Despite defeat to Cardinals, Ryu shows what he’s made of

Despite defeat to Cardinals, Ryu shows what he’s made of 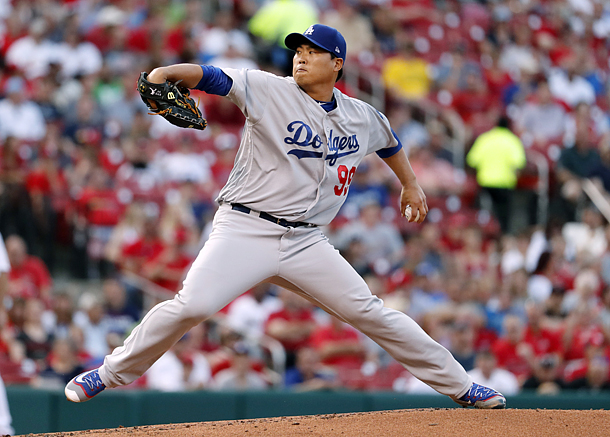 Ryu Hyun-jin, starting pitcher for the Los Angeles Dodgers, throws during their game against the St. Louis Cardinals on Wednesday. Although the Dodgers lost 2-1, Ryu earned his second quality start of the season. [AP/YONHAP]

During the game against the Saint Louis Cardinals at Busch Stadium in Missouri on Wednesday, Ryu Hyun-jin of the Los Angeles Dodgers had a great showing in his return game as a starting pitcher, increasing his chances of getting back into the Dodgers’ pitching rotation.

For the six innings, Ryu gave up one run, three hits, one walk and struck out four. Ryu was substituted while the Dodgers were tied 1-1 with the Cardinals. Although the Dodgers lost 2-1 to the Cardinals, Ryu earned his second quality start of the season. But despite this, the Dodgers’ six-game winning streak came to an end.

After Ryu earned his second win of the season against the Miami Marlins on May 19, he dropped out of the Dodgers’ pitching rotation, as he was put on the disabled list due to hip injury. On May 26, during the Dodgers’ game against the Cardinals, he appeared in the sixth inning as a relief pitcher for the first time since his major league debut in 2013.

He managed to throw four scoreless innings, earning his first save of the career, but as a starting pitcher, he performed poorly. Just when it was confirmed Ryu would be the Dodgers’ long reliever for the rest of the season, he was given another chance as a starting pitcher after Alex Wood was put on the disabled list - and he excelled right when he needed to.

Ryu was stable throughout the game, allowing his first and only run in the second inning. Ryu’s fastest pitch was recorded at a speed of 148 kilometers (92 miles) per hour. Of 77 pitches, Ryu had 51 strikes, targeting the corners of the strike zone while throwing a mix of fastball, change-ups, sliders and curves.

He lowered his ERA from 4.28 to 3.91 and only gave up three hits, tying for the season best with the game against the Philadelphia Phillies on May 1.

“I think Ryu’s excited,” Dave Robers, manager of the Dodgers said as quoted on LA Times. “He goes back to what he’s known as a professional baseball player. To have the depth that we have, to be able to slot him in, it’s good for us.”

In the same game, Oh Seung-hwan, closer for the Cardinals, also appeared and recorded his 12th save of the season. After Dexter Fowler hit a solo home run in the eight, Oh got on the mound in the ninth inning while the Cardinals were leading 2-1 and pitched another scoreless inning to maintain the Cardinals’ one run lead. Thus, Oh lowered his ERA from 3.00 to 2.88. 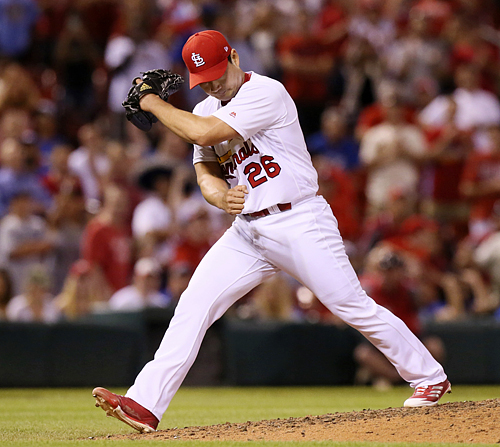 Oh Seung-hwan, closer for the St.Louis Cardinals reacts in the ninth inning during its game against the LA Dodgers at Busch Stadium in Missouri on Wednesday. [AP/YONHAP]

It was the first time in ten years for two Korean pitchers to appear in the same MLB game since Kim Byung-hun of the Florida Marlins and Ryu Jae-kuk of the Tampa Bay Rays played on May 19, 2007. At the time, Ryu played for the Hanwha Eagles, where he had the most number of KBO strikeouts, and Oh played for the Samsung Lions, where he was the KBO’s leader in the number of saves. It was quite a success for the two Korean major leaguers showing in the same game, as Ryu had his quality start and Oh picked up another save.