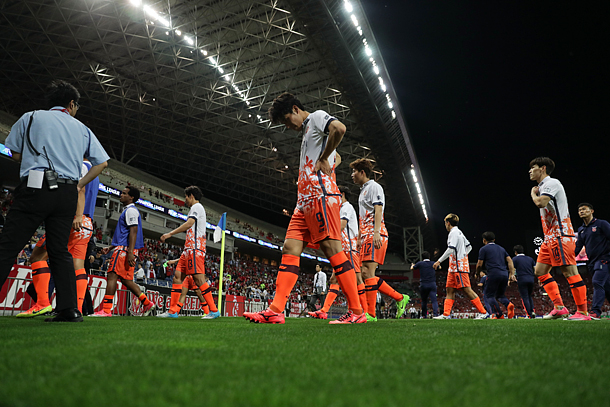 Jeju United players exit the Saitama Stadium 2002 after losing 3-0 against Urawa Red Diamonds in the round of 16 match at the Asian Football Confederation Champions League on Wednesday. [K LEAGUE]

Korean outfit Jeju United were knocked out of the Asian Football Confederation (AFC) Champions League on Wednesday with a stunning loss on the road.

Jeju were blanked by the Urawa Red Diamonds 3-0 in extra time in the second leg of the round of the 16 at Saitama Stadium 2002 in Saitama, Japan. Urawa advanced to the quarterfinals on the 3-2 aggregate. The Japanese side lost the opening leg 2-0 last week, but bounced back with a strong effort on home soil.

Ryota Moriwaki was the hero, as his goal in the 24th minute of the 30-minute extra period put Urawa up 3-0 for the match and 3-2 in aggregate score. This was Jeju’s only second appearance in the AFC Champions League, and first in the competition’s knockout stage.

Jeju were the last Korean club alive at this year’s AFC Champions League. FC Seoul, Suwon Samsung Bluewings and Ulsan Hyundai were all eliminated in the group stage.

This is the first time that no K-League Classic club reached the quarterfinals at the AFC event since the Korean league started sending four representatives in 2009.

Jeju entered the match in the driver’s seat, and even a one-goal loss would have been enough to send them to the quarters.

Needing a victory by multiple goals, Urawa put Jeju on their heels from the start. Jeju were steady at their own end and kept Urawa attackers at bay in the early going.

Urawa finally solved Jeju defense on a set piece in the 18th minute. Yosuke Kashiwagi’s free kick taken from the left wing found Shinzo Koroki, who headed it in off the right post.

Jeju were lucky not to concede a second goal in the 29th, when Takahiro Sekine stumbled in a wide open opportunity and only managed a weak shot off the left post.

Two minutes later, Tadanari Lee fired a curling shot from the top of the box that hit the left post and then Jeju goalkeeper Kim Ho-jun in the back before bouncing out of the box.

Lee got his moment in the 33rd as Jeju’s defense collapsed and Urawa erased their 2-0 aggregate deficit. Koroki threaded a pass through the box as Lee sneaked in behind the defense for a one-on-one chance against Kim, and his left footed shot easily beat the custodian to put the hosts up by a pair.

Jeju had no shot attempt in the opening 30 minutes and displayed none of the offensive jump that helped them beat Urawa 2-0 just a week ago.

Jeju’s only decent first-half chance came in the 35th, as Lee Chang-min’s shot from long distance after a free kick missed the net to the left.

With the aggregate score even at 2-2, Jeju now needed a goal to knock out Urawa. And they nearly got one back in the 49th, when Kim Won-il’s volley off a Chung Woon free kick was punched out by Shusaku Nishikawa.

Jeju continued to have issues on defense in the second half, and some shoddy coverage nearly cost them another goal in the 52nd, when Yoshiaki Komai found himself alone on the right side of the box after Tadanari Lee’s pass. Kim Ho-jun responded with a fine save on a hard shot to keep it a two-goal deficit.

Jeju started fighting back a little after Komai’s chance, but their hopes for a rally were dealt a blow when defensive back Cho Yong-hyung was sent off in the 81st with his second yellow card of the night after a hard tackle on Koroki.

Jeju got into a scramble mode, and only seconds before the regulation play ended Kim made a save on Tomoaki Makino’s header to keep Jeju alive and send the match into 30 minutes of extra time.

Neither team really threatened to score early in the extra period, though Takuya Aoki forced Kim to make a diving save in the fifth minute.

Jeju wasted a glorious chance in the 23rd minute of extra time when Frederic Mendy missed a wide open net with his header after a Lee Chang-min cross.

And Urawa made Jeju pay in the following minute, as Toshiyuki Takagi’s cross from the left wing found Moriwaki all alone on the other side for a deft volley.

Tempers flared in the dying moments of the match, with Jeju players taking exception to their opponents’ apparent attempts to kill the clock. Jeju’s Baek Dong-gyu was ejected in the melee for sprinting off the bench to take down an opposing player.

Three yellow cards were issued in the chaotic final seconds, and another Jeju player, Kweon Han-jin, was shown the exit as the benches cleared after the final whistle.