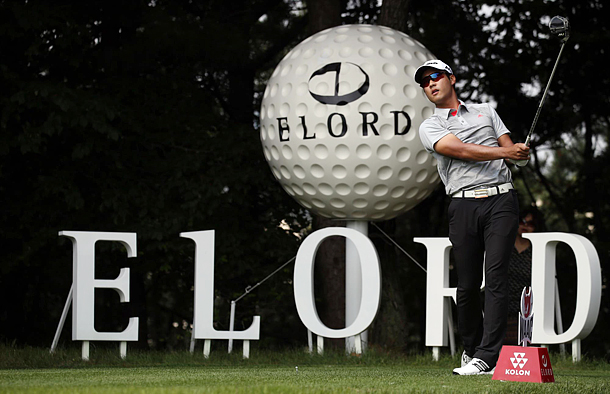 Chang Yi-keun, watches his teeshot during the Kolon Korea Open at Woo Jeong Hills Country Club in Cheonan, South Chungcheong. Chang defeated Kim Gi-hwan in a playoff to capture his first KPGA tour victory. With a win, Chang also earned his spot onto the Open in July. [KPGA]

It was quite a competitive final round as the leaders changed multiple times throughout the round. Kim Gi-hwan took an early two-shot lead with a birdie on the first hole but with a four-putt on the fifth, he started going downhill, making three consecutive birdies on the eighth, ninth and 10th. It took Kim until the last hole to get back up to the leaderboard.

Meanwhile, Chang climbed up the leaderboard in the back nine, making a birdie on the 11th to take the sole lead at seven under-par. Hur In-hoi briefly took the lead with birdies on 12th and 13th to get to eight under-par, but with back-to-back bogeys, the leaderboard once again started to shift. While the lead was at six under-par, it seemed very likely that Hur would win the event, hitting the green on three in the 18th hole, par-five, but with a three-putt, Hur finished the tournament at six under-par. 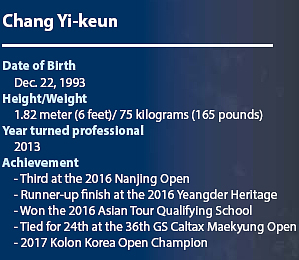 Choi Jin-ho recorded the lowest score, at six under-par. And it seemed like six under-par was going to be the winning score until Chang and Kim, the champion group, started to make their move toward the end. Kim, who struggled with a double bogey and three bogeys until the 10th, started to be more stable in his playing with a birdie on the 12th.

After, while at five under-par, Kim made a chip-in birdie to tie the lead. At the same time, Chang also made a 8 meter (26 feet) birdie putt to get himself back up to the lead.

Tying the lead with one more to play, both Kim and Chang hit the green in regulation and made birdies to force a two way playoff.

Unlike the usual sudden death playoff, the Korea Open was played in a three-hole playoff, where the player with the lowest score in a total of three holes wins the tournament. If the scores are at a tie after three holes, then the format changes to a sudden-death playoff. That said, Chang won the playoff with par-birdie-bogey, even-par, while Kim shot par-bogey-double bogey, finishing at three over par.

“Rather than giving up, I tried my hardest until the end,” Chang said after the round. “And I was given a chance. I’ll never be able to forget about this moment.”

Chang, who had lived in the United States since elementary school, attended the University of Southern California and played college golf. However, to chase his dream of becoming a professional golfer, Chang dropped out of college to try out for the PGA tour.

After failing to earn a tour card on the PGA tour, Chang decided to join the OneAsia Tour, where he finished first in the Asian Tour qualifying school in 2016.

Chang has made a name for himself on the KPGA tour by winning the major event, which he played as a OneAsia tour member. Since Chang does not have the KPGA tour card, a win was very much needed, and as he won the event, he has now earned a five-year KPGA tour card.

Starting this year, the Korea Open announced that they will be giving out exemptions to The Open to the top two finishers at the event. That said, Chang and Kim will be participating at The Open in July.

The Descente Korea Munsingwear Matchplay runs from June 8 through 11.