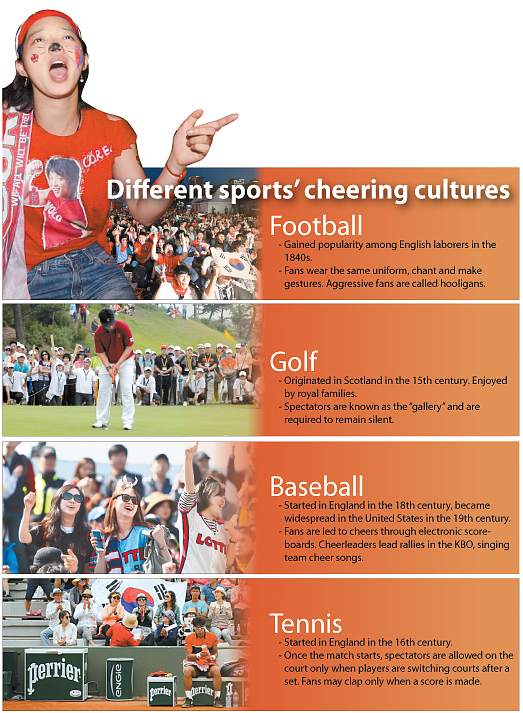 About 30 Korean fans visited the Roland-Garros Stadium to cheer for Chung Hyeon, the only Korean tennis player at the French Open, one of the major tournaments, in his round of 128 match on May 30. The fans screamed when Chung scored, and when he won the first match, they went crazy.

“I am thankful for the fans that came to cheer for me,” Chung said after the match.

However, Sam Querrey, Chung’s opponent in the round of 128, showed he wasn’t comfortable with Chung’s fans. Whenever Querrey made mistakes, the fans clapped and cheered even louder. At one point, Querry complained to the referee and the fans were warned.

Some of the Korean fans that watched the match on TV pointed out that it is important to maintain manners while watching the match as tennis requires the players to cooperate with each other.

Since the 16th century, tennis has been enjoyed by royal families in Europe. That said, it is a part of tennis culture for the fans to cheer quietly. The spectators are allowed only to move around when the players are switching court. Not only that, when there’s an intense rally, the fans have to wait for them to end their rally and once it is over, they are expected to only cheer by clapping.

Just like tennis, golf has a similar cheering culture. In golf, the spectators are called the gallery. When the galleries don’t keep their phones silent or turn off the shutter sounds on their camera, they are given a glare.

Throughout the round, there are volunteers standing in front of the galleries, holding up a sign saying, “please, quiet.”

But unlike these two sports where the fans are expected to keep silent, football and baseball have completely different cheering cultures. When watching a football match, fans wear the same uniform and scream as loud as they can. It is also acceptable for the fans to cheer louder when the opposing team makes a mistake.

In baseball, the fans cheer in open environments where they eat chicken, hamburgers and other food. For 30 years, Korea Baseball Organization (KBO) fans have danced along with the cheerleaders and sung the team’s cheering song. Using thundersticks as cheering tools originated in Korea before being exported to the major league.

“Even in the Davis Cup, which started in the 20th century, the fans had been getting louder in their cheers,” Choi Chun-jin, JTBC3 FOX Sports tennis commentator, said. “But it is still not good etiquette for the fans to cheer for the opponent’s mistake.”

The reason behind having a different cheering culture may be due to historic class differences. Unlike tennis or golf, where the sports were popular among aristocrats, football and baseball were popular among labor workers when they were first introduced.

“Since the aristocrats emphasized restraint and honor, they considered not shouting out for joy was a fair play cheer,” said Lee Jong-sung, a sports industry professor at Hanyang University. “This may be the reason why golf and tennis fans continue to cheer quietly.”

Recently, tennis and golf have been accepting part of the cheering culture of being loud. For Wimbledon 2017, the biggest tournament in tennis, a large screen was installed outside of the court at the lawn plaza to lead the group cheer. And at the Phoenix Open, the PGA allowed the gallery to drink beer and allowed the fans to scream after the ball was hit.