Jin’s hobbies reveal a passion for accuracy and precision

Jin’s hobbies reveal a passion for accuracy and precision 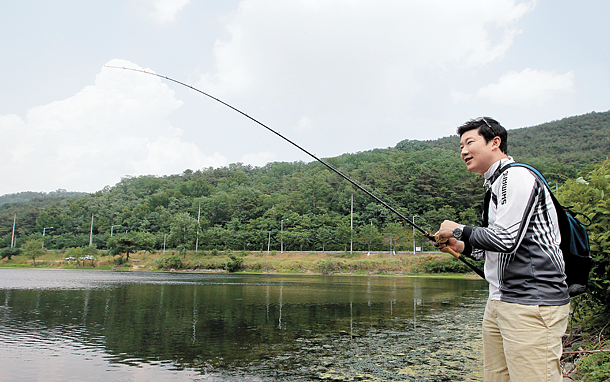 Jin Jong-oh fishes at a nearby river in Daegu. Jin goes fishing about four to five times a month, as fishing allows him to put aside any distracting thoughts. Fishing also helps Jin focus and increases his patience level. [GONG JEONG-SIK]

Upon completion of the Korean Shooting Federation’s national rifle contest, the men’s 50 meter pistol, the four-time Olympic gold medalist Jin Jong-oh rushed to his SUV and left for a nearby river to go fishing. 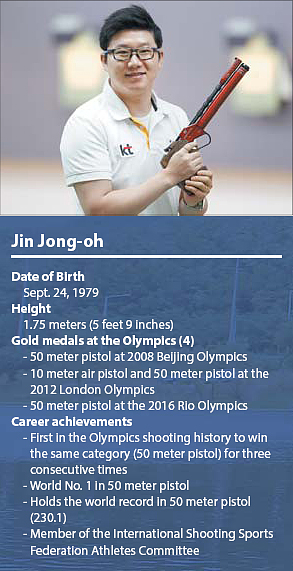 “When I was little, I lived in Chuncheon, Gangwon,” Jin said. “Since there were a lot of rivers nearby, I started fishing at 10.”

But that wasn’t the start of his affection for fishing. Rather, it was when he went fishing with his coach while training for the 2004 Summer Olympics in Athens and caught a 30 centimeter (1 foot) bass.

“I get a lot of stress from shooting,” Jin said. “When I put aside my gun and have my hands on the fishing rod, it helps me dismiss all those distracting thoughts. And when I focus on catching fish, it helps me focus and increase my patience, just what you need in shooting.”

Jin also enjoys photography. He normally uses a Canon DSLR camera and has participated in exhibitions before.

“I started photography in 2006,” Jin said. “I have a lot of experience in international contests. Although I’m not at a level of professional photographers, I can take pictures without a tripod.”

Jin enjoys archery, and taken together, it becomes clear that his hobbies are all an extension of shooting, as they require him to focus and have patience.

Jin Jong-oh’s hobbies include fishing, and taking pictures. Left, Jin with a bass he caught. Center, Jin looks over the pictures he took with the DSLR camera and right is a picture of arboretum Jin took. [JIN JONG-OH]

During the Rio Olympics, in 50 meter pistol, Jin dropped to seventh by shooting 6.6 points, but he fought back and had a great reversal, winning another gold medal.

“In the most important situations, I tell myself to just think about that moment and worry about the rest once everything’s completed,” Jin said. “So when I’m competing, I just think about shooting and then, I play hard.”

On May 20, Jin set a new world record in men’s 50 meter pistol with 230.5 points, during the International Shooting Sports Federation (ISSF) World Cup in Munich, Germany.

It is clear he has little to no competition in 50 meter pistol, but for Jin, there is a bigger worry, as the ISSF recently announced that they will remove the 50 meter pistol event and three other categories for the 2020 Tokyo Olympics, while adding a new event, the 10 meter air rifle mixed-sex team.

“Since the first Olympics in 1896, men’s 50 meter pistol and 25 meter rapid fire pistol are the only two categories in shooting that still remain,” Jin said. “When I first heard from the ISSF that they will be removing my category, I wanted to quit.”

There’s still a faint chance that the category will not be removed, since ISSF member countries, gun and bullet companies have strongly opposed the decision. The issue will be discussed during the ISSF general meeting on June 25.