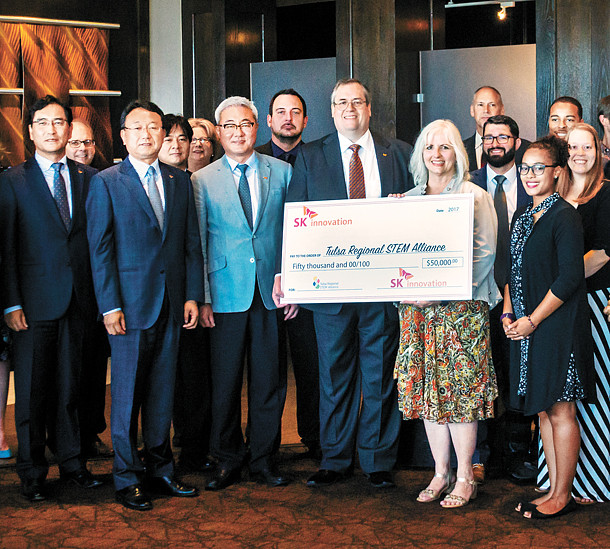 Xan Black, program director at the Tulsa Regional STEM Alliance, holding check on right, accepts a donation from SK Innovation. Holding the check on left is head of SK Plymouth, Bill Diggs, and to his right is Kim Jun, CEO of SK Innovation. [SK INNOVATION]

Oil refiner SK Innovation is making inroads in the communities of Tulsa, Oklahoma, and Houston, Texas.

In 2014, the Korean company acquired oil fields in Oklahoma and Texas and subsequently named the ventures SK Plymouth and SK Permian. Earlier this year, SK Innovation relocated its exploration and production business from Seoul to Houston and has been continuously reaching out to local communities there through donations and direct involvement.

Even before the move, the company differentiated itself from competitors by reaching out to communities in Houston and building a strong foundation of trust. It acted upon its management philosophy of generating happiness for stakeholders and placing priority on generating shared value in local communities over profitmaking.

Oklahomans and Texans have applauded SK Innovation for its management philosophy of “growing together with the local community” and being “a friendly local company.” SK Plymouth, based in Tulsa, recently announced plans to donate $50,000 over two years to the Tulsa Regional STEM Alliance, which supports education in science, technology, engineering and math.

“The happiness of its stakeholders is SK’s foremost management philosophy,” SK Innovation CEO Kim Jun said when the company announced its donation.

SK Innovation has also been contributing to the Houston Food Bank, the city’s largest food donation center, since last May.

Since its foundation, SK Innovation has been upholding the motto of creating shared value for society and sought every possible way to give back to the community part of the money it earns from oil exploration projects.

In 2012 and 2013, the company launched Yachaywasi, an agricultural promotion program in Huancano and Pilpichaca, Peru, that provides education opportunities to 1,600 households and advanced agricultural technologies to 40 households.

“Growing together with the local community is the management philosophy of SK Group,” said Bill Diggs, head of SK Plymouth. “In partnership with local communities, I will continue to generate happiness for our stakeholders through various CSR activities in the Tulsa and Houston areas”

Established in 1962, SK Innovation was the first Korean oil refiner to secure an overseas offshore oilfield in 1984 through successful exploration of the Marib oil block in northern Yemen.