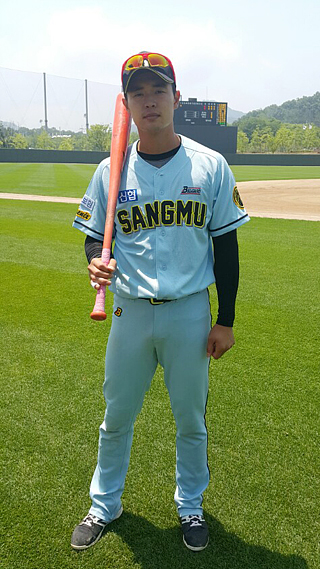 In the Korea Baseball Organization (KBO), Han Dong-min of the SK Wyvern’s leads in number of home runs, at 19 out of a total of 54 games, as of Saturday.

It’s quite an achievement for Han to have already hit so many home runs so far in the 2017 season, but there is another player in the KBO future’s league who has gone one better.

Moon Sang-chul of the Sangmu Phoenix, part of the Korea Armed Forces Athletic Crops., has hit a total of 21 home runs. In the KBO Futures’ league, established in 1990, the most number of home runs hit in a single season was 24.

But surprisingly, after Moon hit his 21st home run of the season against the SK Wyverns’ futures league team on June 6, he was not aware of his achievement.

“Since I’m hitting a lot of home runs this season, I want to hit at least 30,” Moon said.

And that isn’t that much of an exaggeration. Moon hit his first home run of the season in the season opener against the Samsung Lions’ Futures League team, and has been consistently hitting home runs since. At most, he didn’t hit a home run for six games, but recently, from May 28 to June 1, Moon hit a total of six in just four games.

Moon, who graduated from Korea University, was drafted first by the KT Wiz during the 2014 rookie draft special round. Since high school, he received a great amount of attention from scouts as an infielder and was a member of the Korean national baseball team that won the 2009 Asian Junior Baseball Championship.

During his senior year in college, he was rated the most powerful hitter in the college league.

“We drafted Moon because we expected him to become the Wiz’s next franchise star,” said the Wiz associate. The Wiz expected Moon to be the next Na Sung-bum of the NC Dinos.

Despite expectations, finding his spot in the KBO wasn’t easy. In 2015, Moon’s first season in the KBO, he appeared in a total of 51 games, but was only able to hit two home runs. His batting average was 0.163. The following year, there was a slight improvement in his batting average, to 0.200, but as he wasn’t able to make significant improvement, Moon chose to join the Sangmu Baseball team.

“This year, my batting feels a lot more comfortable,” Moon said. “When I was in the Wiz’s Futures’ league team, I always wanted to get to the primary club. But now, I have to stay in the futures’ league until next year. So until then, I want to find my own swing and batting routine.”

While playing for the Wiz, Moon heard many say, “he has power in his batting, but also weaknesses.” Of a total of 175 times he got on the batting mound during the KBO games, he got struck out 58 times. Even when he played in the futures’ league in 2014, he got struck out 80 times out of 57 games.

It’s gotten a lot better this season, though, as he has not getting struck out for the first five games of the season.

“A main reason behind a rising player in the futures league struggles in the KBO is because they feel pressure from having limited opportunities,” Lee said. “There are no batters without weaknesses. But they can overcome them by playing more.”

There are a lot of players who think the success in the futures’ league cannot be compared to the KBO, but there are players continuing their success in the KBO, such as Park Byung-ho, who now plays in the Minnesota Twins’ minor league team, Cho Young-hun of the NC Dinos and Choi Joo-hwan of the Doosan Bears.