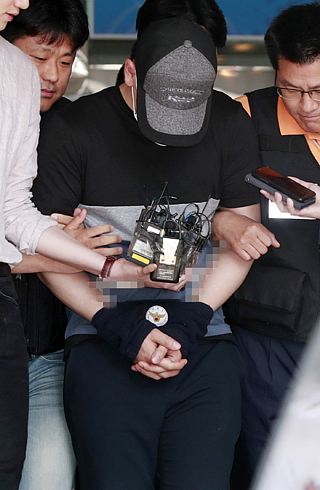 The Yonsei University student who left a nail bomb at his professor’s office is taken to court from Seodaemun Police Precinct, western Seoul, on Thursday. [YONHAP]

The Yonsei University student who left a nail bomb at his professor’s office did it because the professor had “humiliated” him, police said on Thursday.

Police said that Kim, who graduated early from a specialized science high school in Seoul and pursued his bachelor’s and master’s degrees at Yonsei, knew how to make a bomb and started making it at home in late May, finishing it on Saturday.

“Kim told police that he had intended to scare and harm the professor, but added that he didn’t think the professor could die from the bomb attack,” police said. “The professor said his conversations with Kim were for educational purposes and that he doesn’t want Kim to be punished, but that has no effect on the investigation.”

Police are seeking a detention warrant for Kim on the charge of using explosives, which is punishable with at least seven years in prison.

“We may include another charge of attempted murder, but are discussing that with the prosecution,” a police officer said.

The professor, a 47-year-old also surnamed Kim, suffered first- and second-degree burns on his wrists, chest, face and neck when he opened the bomb left at his office on Tuesday morning, and was treated at Severance Hospital. He had been the student’s adviser.

Authorities arrested the student Tuesday night after inspecting CCTV footage and interrogating the student upon his arrival at the university in the afternoon.

They arrested him when they obtained footage of him throwing away gloves near his boarding house, and upon finding these gloves, found traces of gunpowder on them.

Kim told police that he first got the idea when he read an article about a terror attack in April in the St. Petersburg subway in Russia. Kim visited Russia from May 13 to 22 with two other Yonsei students as part of a mechanical engineering training program, police said.

“Kim said that after reading an article about it, he thought this could be a way to [get back at his professor],” police said. “He said that he felt humiliated after being scolded by the professor in front of other students.”

Other students who witnessed the incident relayed varying accounts to police.

“Some said that they were having a hard time in general in the lab, while others said that the scolding was nothing too severe or out of the ordinary,” police said. “But Kim said he was constantly scolded and chastised by the professor during his research and studies at Yonsei.”

The professor told police he did not know Kim had harbored any ill will toward himself, saying Kim was “a good student.”

Kim prepared the materials for his bomb - a tumbler, four AA batteries, gunpowder and screws - in late May, police said.

Kim had intended for the screws to fly out of the bomb upon detonation, but they did not.

“The professor was burned from the flames from the bomb, but there was no explosion,” police said.

Kim is also alleged to have attempted to create an alibi.

On Tuesday morning, Kim left his boarding house at around 2:37 a.m., got to campus around 3 a.m. and used a 3-D printing machine at a lab in Engineering Hall 1. He was caught on CCTV near the professor’s office on the fourth floor at around 7: 40 a.m.

“When asked about this, Kim initially said he was walking around the hallway to keep awake because he had come to campus so early that morning,” police said.

After hanging the bomb on the professor’s door, Kim returned to his boarding house, had breakfast and did not return to campus until a colleague contacted him about the incident.

“Kim said that he didn’t think he was going to be caught,” police said. “He regrets what he did.”

Kim is seen smiling widely in a photo taken together with the professor and other graduate students from the professor’s lab, published on the university’s website last year.