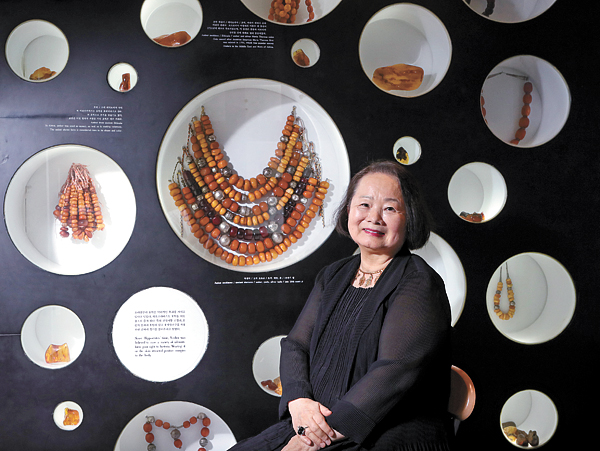 At the entrance to the World Jewelry Museum, director Lee Kang-won describes amber, which can contain insects, plumage and foliage, as a living jewel. [CHOI JEONG-DONG]

“I was almost beaten by a group of people because I grabbed the wrist of some African belle whose bangle was too beautiful,” said Lee Kang-won, a the 70-year-old director of the World Jewelry Museum. “When I recall having walked at night several hours in order to procure Indio jewelry, or when I wound up in a civil war, I still get shivers down my spine.”

In her recently published book, “A Woman Who Talks of Jewelry,” Lee acquaints the reader with anecdotes of her decades overseas spent collecting jewelry.

Leaving Korea in 1971, she accompanied her diplomat husband, Kim Seung-yeong, to nine countries over the next three decades: Brazil, Germany, Ethiopia, the United States, Jamaica, Costa Rica, Colombia and Argentina.

“When I encountered a beauty selling vegetables at a highland open market in Addis Ababa, Ethiopia, during the 1978 civil war, I felt my heart had stopped,” said Lee. “I thought I had met a goddess because she and the silver necklace she wore were so beautiful and dazzling.”

Lee offered her a hundred dollars for the necklace, but the woman was unwilling to part with it as it had been a wedding present. Lee says this was the start of her fascination with jewelry.

“Traditional jewelry was the top art product that a premodern craftsman could make,” said Lee. “Viewing unconventionally shaped African jewelry, one recalls the words of Shakespeare about how the oldest is the newest and the oldest thing can hold the most modern meaning.”

After her husband’s retirement in 2002, they returned to Seoul and Lee opened the World Jewelry Museum two years later in Samcheong-dong, central Seoul. Though the three-story building is small, the museum houses 3,000 pieces of jewelry from the 60 countries Lee traveled to over the past 30 years.

To cultivate a systematic approach and a discerning eye for aesthetics, Lee embarked on a one-year study abroad to the Netherlands and Italy for her 60th birthday.

Lee also taught herself five languages: English, German, Spanish, Portuguese and Amharic (Ethiopian). Her trick to language acquisition is reading a newspaper or book in that language every morning.

In 2015, the World Jewelry Museum was listed by Conde Nast Traveler, a well-known American travel magazine, on their top 10 must-see museums for jewelry aficionados, sharing the spotlight with the Smithsonian’s National Gem Collection and the British Crown Jewels.

“There were some advantages as a diplomat’s wife, but if I had no curiosity or spirit of adventure, I would not have thought of traveling to 60 countries,” said Lee. “That journey paved the way for my path as a jewelry collector. Traveling is a grand library holding many answers for what I like and what I do. Age isn’t important. If one wants to search for a new light in life, one must go at once.”