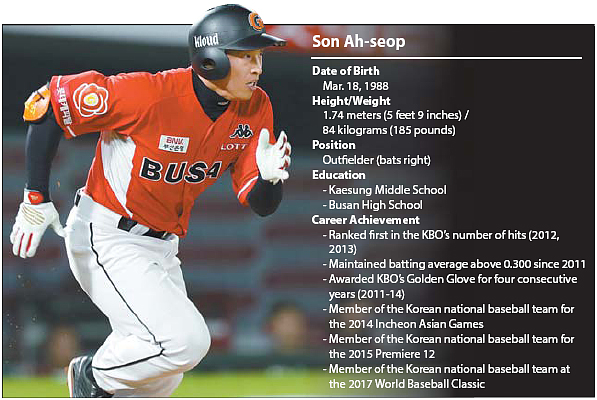 Standing at 1.74 meters (5 feet 7 inches) tall, outfielder Son Ah-seop of the Lotte Giants doesn’t have the typical physique of a baseball player or a particularly outstanding swing, but by studying the mechanics of a baseball swing, he has created one that works best for him.

With that swing, Son has become one of the most consistent players in the KBO, winning the golden glove for four consecutive seasons and maintaining a batting average above 0.300 every season. This season, his 11th in the KBO, Son is recording a batting average of 0.339, and has recorded seven home runs and 37 RBIs as of Saturday. Despite his success, Son is still looking for improvements.

“In the past, my baseball was simple,” Son said. “I was being too aggressive both offensively and defensively.”

Up until last year, when he saw a player in a scoring position, Son only thought of sending the ball back to home base, rather than throwing it to a cut-off guy.

“This year, once I get the ball, I tend to look around more and try to think of different plays,” Son said.

On offense, rather than just trying to make a hit, now, he tends to think about the tendency of the pitchers and learned when and when not to hit. Throughout Son’s career in the KBO, he has been known for his ability to transform a pitch thrown outside of the strike zone into a great hit. Though he hasn’t lost his ability to make great hits, Son has learned to make better decisions in the batter’s box.

“Sometimes, I feel like it was better to be a rookie where I wasn’t afraid of failing,” Son said. “But to become a better baseball player, I need to think more.”

Even when he wasn’t playing his best, it didn’t take much time for Son to get back on track. Among Giants fans, Son is known as a player that they have to worry about the least.

“All players probably have the same thought: that the basics are sometimes the hardest thing in baseball,” Son said. “It takes effort to maintain the same routine every day.”

Although Son has kept his batting average above 0.300 every season, he is still not satisfied with his achievements, as he never had a season that was exceptionally better than the previous.

“There are many players that are consistent but they have at least a season or two where they played above average,” Son said. “I’m proud of my consistency, but I always come up short when it comes to stepping up.”

Seo Geon-chang of the Nexen Heroes is another consistent player in the KBO. During Seo’s 2014 season, he recorded his highest batting average of 0.370, scored 137 runs with a slugging average of 0.547 and a 0.438 on base percentage. Not only that, he became the first KBO player to produce more than 200 hits in a single season and was awarded as the MVP.

“I’m not at a level of the top class players,” Son said. “I’ve never been a batting champion.”

These days, Son’s biggest concern is injury. In June, 2015, he missed nearly a month due to wrist injury.

“Since the injury, I’ve been focusing on weight training, my diet, stretching and massage,” Son said. “If I’m playing bad, I just need to try harder, but if I’m injured, there’s nothing I can do other than to rest.”