A young Spider-Man finds his way : Latest film centers on Peter Parker learning how to be a superhero

A young Spider-Man finds his way : Latest film centers on Peter Parker learning how to be a superhero 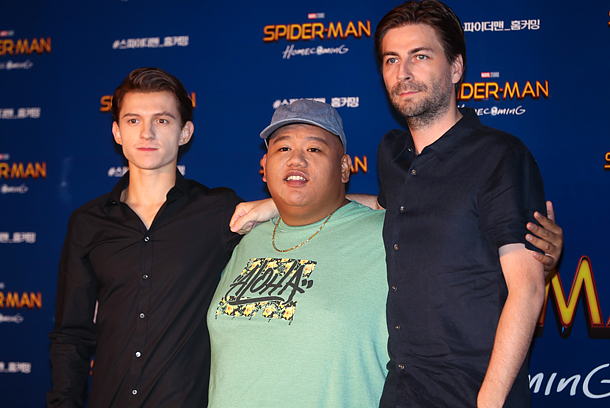 From left to right are Tom Holland, Jacob Batalon and Jon Watts, the director behind the upcoming “Spider-Man: Homecoming.” Ahead of the movie’s release Wednesday, the three visited Korea and held a press event Monday.[YONHAP]

Male superheroes are often associated with masculinity, but the teenaged Spider-Man from the newest “Spider-Man” reboot depicts the super hero as a naive and charmingly awkward high school kid simply wishing to join the Avengers.

Despite there being fans of the franchise all around the world, Korea was one of the most welcoming countries, according to the three.

“I think this is one of the most exciting stops [on the press tour],” Holland told reporters excitedly, thanking fans for their enthusiasm during the red carpet event held a day earlier and thanking the flashing cameras of the photographers present during a press conference held on Monday in Yeouido, western Seoul.

The latest Spider-Man reboot is very much a story about Peter Parker’s relationship with Tony Stark (Robert Downey Jr.). The plot revolves around Parker’s desire to prove his abilities to Stark, who plays a surrogate father figure in Peter’s life.

The young English actor described working with Downey as “a dream come true,” and further added that “relationship between Tony and Peter is very interesting” in that “for the first time, he [Tony] cares about someone other than himself.” Tony, in fact, plays a “reluctant mentor character,” according to Watts.

It was not difficult for Holland to understand his character, as he sees himself as being much like Parker.

“My teenage years were strange. I was studying at school but was lucky enough to be making movies outside of school,” the 21-year-old said and added that he “didn’t fit in particularly well,” which is partially why he “can relate to Peter Parker in so many levels.”

Holland explained that after becoming Spider-Man, Parker has the potential to “become the coolest kid in the planet.” But the character remains himself at school, which is something that Holland admires and can relate to.

The actor explained that his life has similarly changed completely [after playing Spider-Man], - “who would have known a kid from Kingston would have a press conference in Korea?” - but said that no matter how much things have changed around him, it’s important for him to “stay true to myself,” just like Parker did.

“I learned so much from him as a teenager. I love playing him because I feel like I’m him just with an English accent.”

Spider-Man’s place in Marvel Cinematic Universe (MCU) is very unique because he really is a kid, according to Holland.

“We’ve seen kids throughout MCU, but we’ve never really seen a kid carry a movie... It’s a very interesting dynamic to see a kid alongside the Avengers.”

Holland played the Spider-Man role for the first time in “Captain America: Civil War” (2016), where he was recruited by Tony Stark onto Team Iron Man to take on Team Captain America.

“Spider-Man: Homecoming” will be the first Spider-Man movie jointly produced by Marvel Studios and Sony Pictures since the two reached an agreement to work together on the character’s movies.

The movie runs for 133 minutes, and is rated 12 and above. It co-stars Michael Keaton as a villain and Zendaya Coleman as Parker’s love interest. It is the first Spider-Man movie in three years since “The Amazing Spider-Man 2” in 2014.