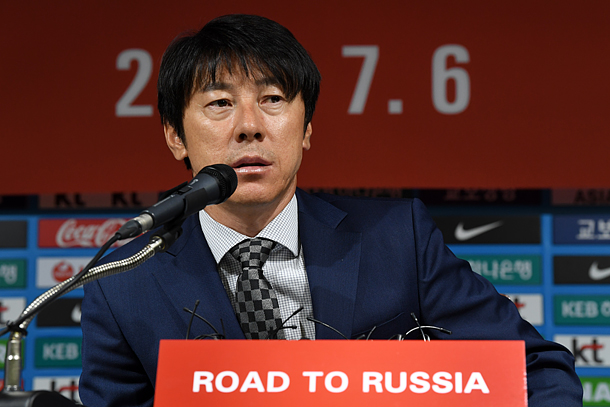 Shin Tae-yong, head coach of the Korean national men’s football team, during a press conference at the KFA House in Seoul on Thursday. [YONHAP]

Shin Tae-yong, who was called up at the 11th hour to fill in for Uli Stielike after he was fired as head coach of the Korean men’s national football team, promised to focus on team strategy and winning Korea’s two remaining qualifiers for the 2018 FIFA World Cup during his first press conference as coach on Thursday.

“I was appointed to the Korean national football team in a difficult situation,” Shin said. “I’m honored and thankful to the Korea Football Association and others for giving me the responsibility to manage the team.”

With the team’s next qualifier, against Iran, scheduled for Aug. 31 and another match against Uzbekistan on Sept. 5, it will not be possible for Shin to make any major changes to the team’s roster. But with what he can do, Shin has demonstrated a different standard than Stielike, opting for local players that will work well together rather than heavy hitters from foreign leagues.

“I have a different personality and style of coaching from Stielike,” Shin said. “That said, my goal is to select players under the condition of winning the remaining qualification matches.”

To replace Ki Sung-yueng and Son Heung-min, both English Premier players who are out due to injuries, Shin has expressed intent in recruiting players from the local K-League rather than tapping Lee Seung-woo and Paik Seung-ho, the Barcelona duos who excelled in the FIFA U-20 World Cup.

“I’m not going to select players just because they play in foreign leagues,” Shin said. “Depending on the situation, if he’s a must-have player for the team, then I’ll choose him regardless of his experience.”

Shin’s player selection will likely be guided by considerations of team dynamic, and judging from Korea’s recent matches, the strategy focus may be defense, which Shin believes can easily be improved through teamwork.

The coach is confident the short amount of practice time leading up to the qualifier against Iran - four days - will help maximize players’ potential. “Since we’ll have the best players on the team, they’ll absorb the strategy and tactics quickly,” Shin said.

Fans are holding out hope that Son, who had a record-breaking season in the English Premier League, will recover in time to play in the two qualifiers. The Tottenham Hotspur forward hasn’t had much opportunity to demonstrate his skill for Team Korea, only scoring 17 goals in the 55 matches he has played since 2010. Fans faulted Stielike for failing to utilize Son. “Son is a great player,” Shin said. “I’ve thought of ways to use him on the field that Stielike hasn’t. I’ll be using different sides of Son’s moves in matches.”

It’s only been three days since Shin was appointed head coach, and already, questions are swirling about the composition of his coaching staff. On Wednesday, Jung Hae-sung, an assistant coach under Stielike, resigned, but two other coaches, Seol Ki-hyeon and Cha Sang-kwang haven’t mentioned resignation.

“Rather than assisting the head coach, I want a coaching staff that can get along with the head coach and make the team become one,” Shin said. “I want to recruit coaches that can think of strategies, tactics and make comments that I couldn’t think of.”

When asked about communication between players and coaches, which was cited as an issue under Stielike, Shin showed little sign of concern, saying he didn’t have much trouble with communication during his previous stint as the team’s caretaker manager in September 2014.