Giving the gift of Joseon-era elegance : The intricate royal art of wrapping is on display at the National Palace Museum

Giving the gift of Joseon-era elegance : The intricate royal art of wrapping is on display at the National Palace Museum 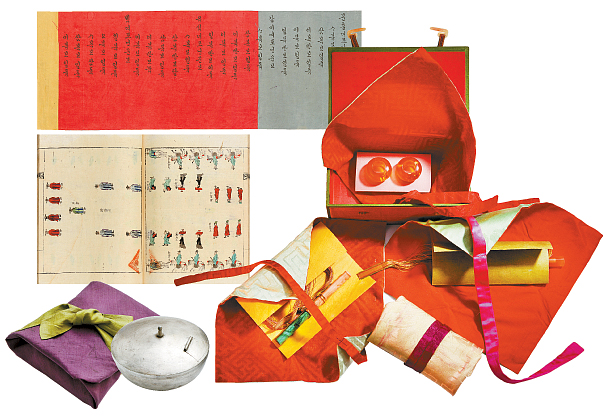 Usually the National Palace Museum organizes exhibitions showcasing precious objects of the past that help people of today get a better glimpse into the lives of the ancestors. With its latest exhibition, which kicked off on June 27 and runs until Sept. 3, the museum shines a spotlight on the wrapping cloths of the Joseon Dynasty (1392-1910) that were used to wrap precious objects and offerings of the Joseon royal households.

Joseon royal households celebrated numerous special occasions in which there was a need to wrap valuable objects, either to protect or to present, and to add additional adornment and complete the formalities. Wrapping objects had to strictly follow the royal protocols, which states in detail what kind of material and which size and color wrapping cloths should be used.

For example, according to the royal decorum, a ceremonial robe had to be carefully folded inside a wrapping cloth before it was placed in a customized box, while royal seals, investiture books and royal edicts presented at rituals and ceremonies had to be wrapped with silk and placed in boxes.

At this exhibition titled “The Art of Wrapping in the Joseon Dynasty,” visitors can witness how strictly and aesthetically royal objects had been wrapped using different materials and color, corresponding to each royal household member’s status and the occasion.

The exhibition starts off by introducing the government office called the Bureau of Royal Attires that was in charge of wrapping. It was here where they created the rules and regulations to wrap various royal objects to avoid valuables from getting damaged while completing the formalities of the royal court.

Most royal objects were first wrapped using wrapping cloth, then were inserted inside tailor-made boxes. They were then wrapped once more for a final touch. There were four different types of wrapping cloths - single-layered, double-layered, cotton-stuffed and oil paper lines.

Vivid and bright colors like red, blue, purple and yellow were preferred and a wide range of materials such as silk, hemp, cotton and paper was used depending on the object they cover.

For example, to wrap Crown Princess Euimin (1901-1989), also known as Queen Yeongchin’s, pendant in the shape of Buddha’s hand, which is Important Folklore Cultural Heritage No. 265, it was first placed on top of a thick cotton ball to maintain its shape and then wrapped in a double-layered silk wrapping cloth that has straps attached so that it can be firmly tied. It was then placed inside a box. The exterior of the cloth was yellow while the inside was orange. The wrapping was, of course, done strictly following royal protocols as determined by the Bureau of Royal Attires.

“By carefully studying what kind of wrapping cloths were used for different objects displayed at the exhibition, visitors will understand how the royal families regarded each objects,” said Park Su-hee, a researcher of the museum who curated the exhibition. “Visitors will also notice how red and orange silk cloths were abundantly used to wrap ceremonial objects while colors like blue, gray, purple and white were used to wrap daily supplies.”

Protocol for wrapping objects like royal seals, investiture books, royal edicts and royal portraits epitomizes the importance of presentation during the Joseon era.

These royal symbols, which represented the high status and dignity of principal figures, were wrapped following stricter rules known as bonggwa (sealing and wrapping). The wrapping process for these items was conducted as a ritual in the presence of high officials.

Such valuables required more wrapping procedures, and were often wrapped multiple times. First, an item was covered by a cotton-stuffed wrapping cloth - testifying that these are indeed valuables - and then it was placed into an inner box. Then the box was covered again by a single-layered wrapping cloth, which gets inserted into an outer box. For protection, cotton stuffed lining was used as a buffer and perfume pouches were left inside the boxes to prevent insects from damaging the valuables.

“Wrapping in the royal court of the Joseon Dynasty represented the royal household’s level of care and genuine desire to show their grandeur, elegance and dignity,” said Park. “This exhibition introduces the centuries-old tradition of wrapping in the Joseon court through a wide array of wrapping materials. We hope the exhibit can help visitors gain an insight into the wisdom and aesthetics of our ancestors as well as their effort to cherish beautiful objects and decorate them with proper formality.”