A thrilling tale by land, sea and air : Nolan’s retelling of the Dunkirk evacuation is a full cinematic experience

A thrilling tale by land, sea and air : Nolan’s retelling of the Dunkirk evacuation is a full cinematic experience 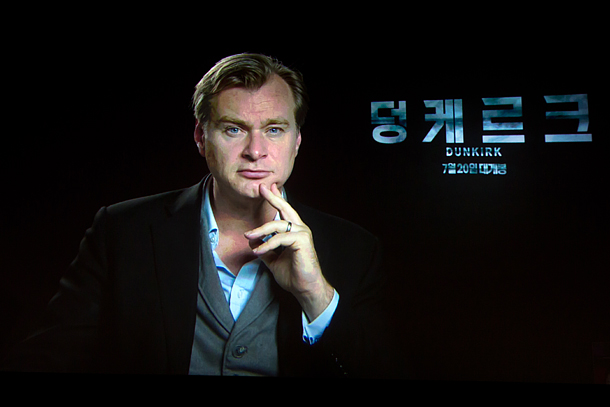 Director Christopher Nolan is best known for his futuristic films like “Interstellar” (2014) and “Inception” (2010), but with his latest work “Dunkirk,” he takes audiences to the past, reimagining a pivotal moment in World War II when the Allies lost France to the Nazis.

Nolan’s upcoming film portrays the tension-filled evacuation of nearly 400,000 Allied soldiers from the harbor of Nazi-occupied Dunkirk, France, in 1940. The movie opens with Allied troops surrounded by enemy forces.

Trapped on the beaches with their backs to the sea, the struggling soldiers encounter an impossible situation as the Germans close in.

“Dunkirk is a story I’ve known about for a long time, but it’s a film that’s never been told in modern cinema,” Nolan told the Korean media on Thursday. “I think Dunkirk is one of the greatest stories in human history, and I wanted to seize the opportunity of bringing the story to the modern audience for the first time.”

The film pushes the limits of cinematic possibility using IMAX cameras on land, air and sea to unravel the story from three visual perspectives with an ensemble cast of Tom Hardy, Kenneth Branagh, Mark Rylance and Fionn Whitehead.

On the reasons why he used different timelines in the narrative, Nolan said, “I wanted to tell the story in as subjective and an immersive way as possible. The reason I wanted to do this was because I wanted to make the most suspenseful and intense visual experience to the audience as possible. So rather than cutting out from drama to show generals and politicians in rooms with maps explaining things, what I wanted to do was fill up using the three timelines a more complete picture to the audience of the events at Dunkirk.”

He added he wanted the audience to feel that they were there with the characters the whole time. As Nolan sees it, “Dunkirk” is not a war movie per se but a suspense thriller that vividly puts viewers in the shoes of soldiers fighting for survival. The literal message of the movie, according to the director, is a reminder to the modern audience that people can achieve a lot more as a community than they can as individuals.

Even for a great storyteller with 20 years of experience and many lauded films, including “Memento” (2001) and “Insomnia” (2002), Nolan said he continues to face challenges maintaining audience interest.

The challenge of “Dunkirk,” he said, was how he could captivate viewers about the travails of combat without “exhausting” or “repulsing” them too much.

“Dunkirk” is already one of the most talked-about films of the summer around the world and is slated to open in Korean theaters on Thursday. Rated 12 and above, the period drama runs for 106 minutes.