Choi promises to push for reform

Choi promises to push for reform 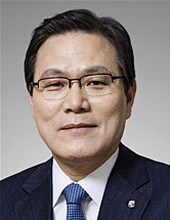 Choi Jong-ku, the nominee for the head of the Financial Services Commission, said he will push for restructuring in the petrochemical industry, steel and construction during his confirmation hearing on Monday.

The comments reignited attention on the country’s corporate restructuring, a process that had largely stalled amid the leadership vacuum at the financial regulator.

“The restructuring in the shipbuilding and shipping sectors is going smoothly,” Choi said. “But we urgently need a broader direction for the reorganization in the petrochemical, steel and construction sections.”

He refrained from specifying how those sectors would carry out the shake-up, but the industries, including petrochemical, have experienced oversupply and lack of demand.

Choi went on to note that the regulator and creditors should be able to push ahead with the industrial shake-up, impacted by the evolving corporate landscape and competition in emerging countries at the expense of minor losses.

President Moon Jae-in appointed the former president of the Export and Import Bank as chief of the Financial Services Commission earlier this month.

Observers expect Choi to pass the hearing since he is considered to have no serious ethical or career lapses.

Besides restructuring, he also laid out his policy vision, which primarily goes hand-in-hand with Moon’s pledges, focusing on job creation and saying that the finance industry can create quality jobs. Choi coined the term “productive finance” to describe the process of creating more jobs rather than an economy built on consumption.

To ease the burden on borrowers, he said that the maximum interest rate allowed for lenders will be lowered to 24 percent from the current 27.9 percent during his term. He also pledged to expand the stewardship code, which was introduced in February.

The stewardship code, which is not legally binding, is a set of guidelines aimed at encouraging institutional investors to execute their voting rights in a more responsible manner and engage in the creation of sustainable, long-term corporate practices.

The Korean version of the stewardship code, consisting of seven principles, requires institutional investors to disclose how they will engage with and monitor investee companies and the reasons for their voting activities.

But so far, only a handful of smaller private equity funds confirmed their participation and the National Pension Service, the country’s largest institutional investor, has yet to announce its intention to join.

Choi said that the regulator will increase incentives to attract more participants and address the potential obstacles hampering adoption.

He also touched upon speculation that the policy-making functions of the Financial Services Commission could be merged into the Ministry of Strategy and Finance and the regulatory role be taken on by the Financial Supervisory Service.

“There is a consensus to be made on the matter,” he said, “and we need to discuss it going forward.”

He acknowledged that the current debt level and the pace of growth is “excessive” because of the low interests and the overheated real estate market.