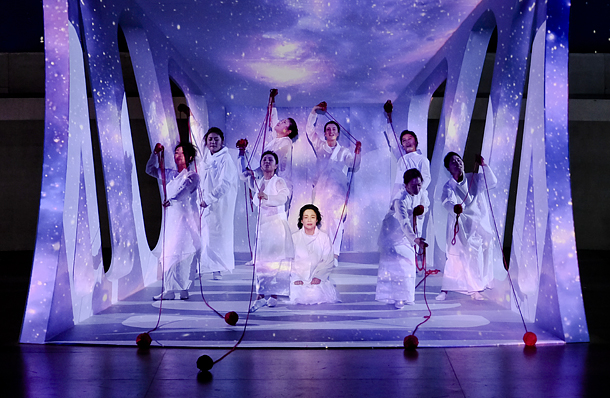 National Changgeuk Company’s “Trojan Women,” which was highly acclaimed by both critics and the audience in its 2016 premiere, is making a come back in November. The performance will also travel to Singapore and England during the season. [NATIONAL THEATER OF KOREA]

The National Theater of Korea has released its schedule for the 2017-2018 National Repertory Season, which begins on Sept. 5. The state-run theater, which houses three resident companies - National Changgeuk Company, National Dance Company and National Orchestra - launched the “National Repertory Season” in 2012 by grouping the second half of the year and the first half of the following year together as “one season.”

Next season, which will be the theater’s 6th, will consist of 44 performances by the three resident companies, and will include 20 new works. The season ends on July 8, 2018.

Comparing the figures of the same season in 2011-2012 (before NTOK adopted the Repertory Season system) with the last Repertory Season in 2016-2017 shows how successful the system has been for the theater. According to the theater, the total number of works created by its three resident companies have increased from 33 to 49, while audiences have grown from 17,295 to 134,996.

One unique challenge of the upcoming 2017-18 Repertory Season is that the Haeoreum Grand Theater, the company’s main performance space, will be undergoing renovations from January. The home of the NTOK has never gone through a major makeover since opening in 1973.

“The design of the Haeoreum Theater is largely influenced by Japanese kabuki theaters, therefore, we are finally making changes to upgrade the venue to better accommodate Korean traditional performances, which we mainly showcase,” said Ahn Ho-sang, president of the National Theater. “Therefore, we have no choice but to evacuate from the theater and stage many of our upcoming performances at other venues such as the LG Arts Center, Seoul Arts Center and Myeongdong Theater for the upcoming season. But we are seeing this as an opportunity to appeal to audiences who have never been to the National Theater of Korea.”

Some of the notable works included in the upcoming season are “The Wildfire,” which is considered a landmark piece in the history of Korean contemporary plays, presented by the national Changgeuk Company. This poignant tragedy will be rewritten in the changgeuk (Korean traditional opera) format for the first time.

Some of NTOK’s most popular performances, like the dance company’s “Scent of Ink,” and “The Banquet,” will also be performed during the upcoming season.