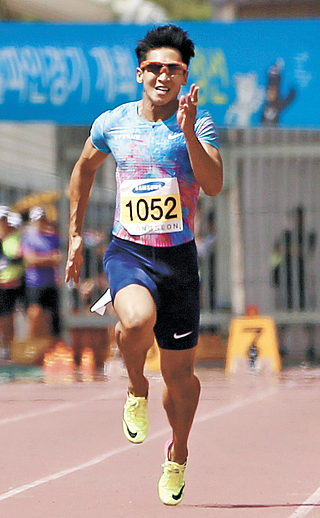 Korean sprinter Kim Kuk-young said Wednesday he aims to break the 10-second barrier in 100 meters next year, hoping his revised sprint technique will pay off.

Kim last month set the men’s 100m national record with a time of 10.07 seconds. His time was enough to beat the world championships’ qualifying time of 10.12, set by the International Association of Athletics Federations (IAAF).

This year’s IAAF World Championships will be held in London starting on Aug. 4 and Kim said he is ready to compete with top class sprinters at the competition.

“For this year’s worlds, I want to run with my full power from the start,” Kim said before attending a corporate event in Seoul. “If I can make a good start and maintain my speed, which I’m working on right now, I think I can get a good result.”

Kim, however, said he aims to set a sub-10 record next year at the Asian Games in Jarkarta because he is still working on his new sprint technique.

“I’m still trying to get accustomed to my new technique,” he said. “First, my long-term plan is to break the 10-second barrier at the 2018 Asian Games in Jakarta.”

Kim took 50 steps to complete the 100m dash at the Rio de Janeiro Olympics last year with the time of 10.37 seconds, But at the Korea Open International Athletics Competition in Jeongseon, some 210 kilometers east of Seoul, where he set the record-breaking time, he ran the 100m in 49 steps after widening his stride.

“When I race, sometimes I say to myself maybe I have widened my stride too excessively, but my record has gotten better,” he said. “If I can make my arm swing simpler and get it in sync with my longer stride, I think I can race better. I’m trying to master that technique quickly and accurately.”

The 26-year-old said he is also hoping to benefit from a wearable neurostimulation device that he has been using since last month. Kim said he used a headset manufactured by U.S.-based firm Halo Neuroscience, which stimulates the brain’s motor cortex in athletes to improve their performance, during his training.

“Since I compete in a sport that needs explosive energy, I used it when I was practicing my start and weight training,” he said. “Since it stimulates my brain, I think it also helps me to improve my concentration.”

Kim said he will depart for London next week with his coaching staff.

“I will prepare thoroughly and adjust well to London’s environment, so that I can complete the race without regret.”