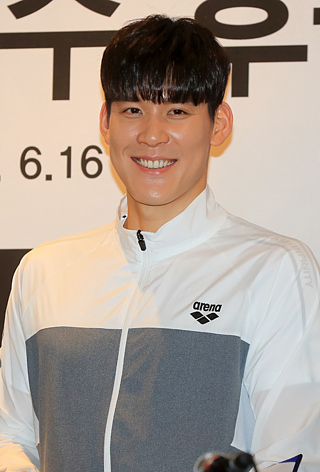 Swimmer Park Tae-hwan speaks at a press conference in Seoul in June, when he briefly returned to Korea. [YONHAP]

Korean swimming star Park Tae-hwan will be chasing his first world title in six years in Hungary starting this weekend.

The 2017 FINA World Aquatics Championships began last week in Budapest with the diving and synchronized competitions, and the swimming portion will get underway Sunday. Park’s first race, the 400-meter freestyle, will have heats Sunday morning, followed by the final later in the same day.

The 27-year-old has been on a roll in the past few months, reeling off 11 international victories since last November following a disastrous Olympics in Rio de Janeiro in August.

Most recently, Park won the 400-meter free title at his last tune-up meet, the Sette Colli Trophy, on June 23 in Rome. With a time of 3:44.54, Park defeated two 400-meter freestyle medalists from the 2016 Rio Olympics: Gabriele Detti of Italy, who won bronze in Rio, finished second to Park in 3:45.88, while the Olympic champion Mack Horton, from Australia, finished third in 3:47.58.

Park’s season-best time is 3:44.38, set in his victory at the Arena Pro Swim Series in Atlanta in May. That puts him in fourth overall this year, with Sun Yang of China possessing the fastest 400m time for the year at 3:42.16.

A victory in Budapest will represent another measure of redemption for Park, who earlier served an 18-month doping suspension and missed the finals in each of his three races in Rio after the ban ended.