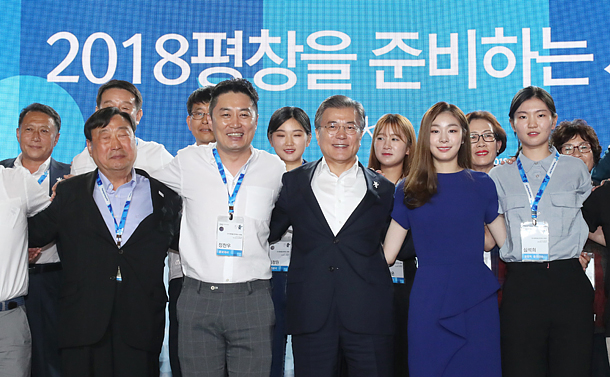 President Moon Jae-in, center, and former Olympic figure skating champion Kim Yu-na, at Moon’s left, both honorary ambassadors for the 2018 PyeongChang Winter Olympic Games, pose together to wish for the country’s successful hosting of the sporting event in a ceremony on Monday in Pyeongchang, Gangwon, some 180 kilometers (112 miles) east of Seoul. [YONHAP]

President Moon Jae-in renewed his invitation on Monday for North Korea to attend the Winter Olympic Games in the South next year, continuing his strategy of using sports diplomacy to thaw inter-Korean relations.

“I urge the North once again to make a decision,” Moon said. “We won’t have hasty optimism, but there is no need for us to take a pessimistic view either. We will leave the door open and wait until the last moment.”

Moon made the remarks during an event to promote the 2018 Olympic and Paralympic Winter Games in Pyeongchang, Gangwon. The games, scheduled for Feb. 9 to 25, 2018, will start 200 days from Monday.

Moon promised the central government’s support for the organizing committee and the provincial government to successfully host the events. “They are the first large-scale international events that Korea will host since my administration’s launch,” Moon said. “I believe the administration is also responsible to successfully host them at all cost.” He was also appointed as a publicity ambassador of the Winter Olympic Games.

He added, “In fact, we have opened our doors wide,” referring to his earlier proposal to the North to attend the Pyeongchang games. “The International Olympic Committee [IOC] also opened the doors for the North’s participation. Now, all there is left is the North’s decision.”

Moon made his initial proposal to the North to form a joint team for the PyeongChang Winter Olympic Games on June 24. He also asked IOC President Thomas Bach to support his plan during his visit to Korea.

During his speech at the Keorber Foundation in Berlin, during his visit to Germany earlier this month, Moon also stressed his ambition for reconciliation of the two Koreas through sports. “Sports have the power of connecting one heart to another,” he said at the time. “When athletes from South and North Korea, and from the rest of the world, sweat and compete against each other, and offer a hand to fellow athletes who have fallen, and embrace each other, the world will witness peace through the Olympic Games.”

He added, “As the IOC has promised its cooperation on the participation of North Korea in the PyeongChang Winter Olympics, I look forward to North Korea’s active and positive response.”

The administration also made official proposals for dialogues. Seoul proposed last week military talks with Pyongyang to ease tension along the inter-Korean border. Seoul also made another proposal for a Red Cross meeting to discuss holding reunions for families separated by the 1950-53 Korean War. Pyongyang, however, gave no response to either proposal.

It remains to be seen if Moon’s renewed appeal for the North will be answered.

During the ceremony, Moon asked companies and public enterprises to offer larger funding to sponsor the events.

The National Assembly on Saturday approved a supplementary budget plan proposed by the Moon administration, which includes 55.7 billion won ($50 million) to support the Winter Olympic Games.

Moon also said successfully hosting the Pyeongchang games will restore the people’s pride, which was hurt by the massive corruption scandal surrounding his predecessor, Park Geun-hye.

The preparation process of the Winter Olympic Games was tainted by the political scandal involving Park, her friend, Choi Soon-sil, and conglomerates, as Choi’s family was accuse of using the sports events for their private gains.

Hanjin Group Chairman Cho Yang-ho also resigned as the head of the organizing committee in the aftermath of the scandal. As of now, former commerce minister Lee Hee-beom is heading the committee.