The people of Jeju Island do not believe in divine providence. For them, it is the person who is loneliest and endures the most pain in life who becomes god. God, in other words, is considered the stone, the wind, the trees and the nature that belong to our daily lives.

Their beliefs show in the beautiful and haunting artwork on display all around the island.

“Girl1” and “Girl2,” for instance, depict the children of Jeju Island in the 1960s and ’70s and show their longing for adults to save them. They invoke the local tale of “The Baby Grandmother on Mara Island,” in which a 10-year-old girl dies on Mara alone.

The girl lost her parents right after she was born and barely survived by working as a nanny. One day, she accompanied a group of adults to Mara Island, where all of them met a raging storm on the way.

The girl was abandoned by the adults as an offering. She desperately waited for her parents to come and save her, but the girl’s wish did not come true.

Yoon Min-seop, the artist behind “Girl1” and “Girl2,” decided to erased the faces of the two girls, giving them anonymity. This is a common motif in Yoon’s work: a human cannot see one’s face through one’s eyes forever.

For this reason, Yoon believes the human face is the least important thing about a person, and blanks out the faces of figures in her work. Thus, they become nobody, at the same time opening up the possibility of being anybody.

With the AmorePacific Museum of Art Project, or APMAP, Jeju Island becomes an art piece in itself. APMAP started in 2013 with the goal of discovering young talented artists and providing them with assistance, ultimately contributing to the vitalization of public art in Korea. APMAP started with an exhibition at the AmorePacific Beauty Campus in Osan, Gyeonggi, in 2013 and toured around many business areas including the Jeju Seoguang green tea farm in 2014, the Yongin R&D center in 2015 and the construction site of the new head office at Yongsan Family Park in 2016.

The first special exhibition of “APMAP 2017 jeju — mystic birth” is running from July 8 to Sept. 3 at Tea Garden/OSULLOC in Jeju.

The project aims to earn Jeju the nickname “island of contemporary art” by exhibiting work that reveals the genuine beauty of Jeju, making the island well known not only at home but also abroad. As the name “APMAP 2017 jeju — mystic birth” implies, art pieces in the exhibition carry the theme of mystical birth and deal with the legends of Jeju.

Sixteen teams of artists explored various locations in Jeju to deeply understand its myths, get inspiration and produce masterpieces. Artists carefully installed their works in empty spaces, just as they filled their diaries with life stories. In this way, meaningless spaces become meaningful ones with messages hidden inside.

Art pieces of diverse forms — sound, sculpture and installation — have been carefully constructed and meticulously placed to fit the surrounding environment. This allows visitors to indirectly but lively experience diverse places in Jeju, giving them the impression that Jeju is not only a tourist attraction but a mysterious island filled with intriguing stories.

“APMAP 2017 jeju — mystic birth” is a free exhibition open to everyone. Visitors can enjoy the masterpieces in and around the Tea Garden/OSULLOC from 9 a.m. to 6 p.m. Monday to Sunday.

Apart from the exhibition, the “Making Coloring Card” program allows patrons to engage in a special experience by filling in drawings with diverse colors and understanding the in-depth meaning behind Jeju’s hidden myths.

The Tea Garden/OSULLOC is 50 minutes away by bus No. 755 from Jeju International Airport. For more information on the program, event and exhibition, visit the AmorePacific Art Museum website at museum.amorepacific.com or call 031-280-5586. 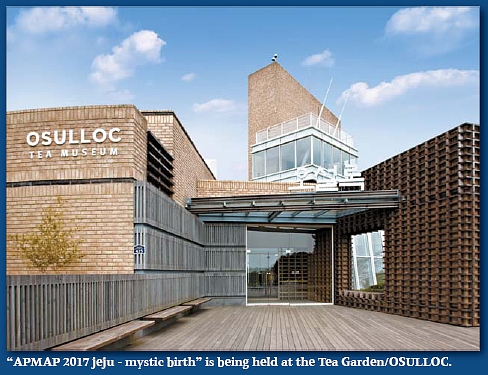 The Tea Garden/OSULLOC is the first tea museum in Korea and was established by AmorePacific in September 2001. It is one of the top attractions on Jeju Island, and is visited by 1.8 million people annually. It was named one of the top 10 art museums by Designboom, an internationally renowned website devoted to architecture design.
The place is cozy for visitors, with a green tea farm and contemporary art pieces throughout the space. The museum began offering tea classes in 2013.