Former motel has vacancy for culture: Newly-built Boan 1942 is home to a gallery and a history-filled bookstore

Former motel has vacancy for culture: Newly-built Boan 1942 is home to a gallery and a history-filled bookstore 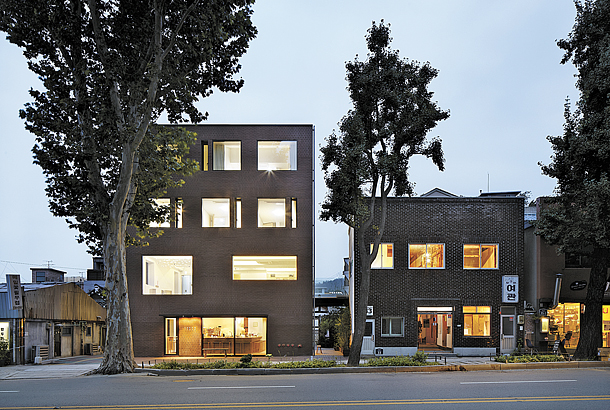 Boan 1942, a gallery and bookstore, has opened right next to Boan Yeogwan, a gallery in central Seoul, so that the two places can be the cultural space for those in the city. [JOONGANG SUNDAY]

Deciding where to go to read books is getting increasingly difficult with more and more unique places to read springing up every week in Seoul. One of the newest places to visit is Boan 1942, a new building opened right next to the Boan Yeogwan gallery in Tongui-dong, central Seoul.

In the second underground floor of the building is the Boan Bookstore. After opening the front door, visitors will be wowed by one 4.2-meter-high (13.7-foot) wall filled with books and another that is filled with bottles. One can simply pick out a book of their choice and sit down with their favorite drink.

That’s not all. Visitors will be standing on a floor made of glass. Remnants of four homes from the Joseon Dynasty (1392-1910) were discovered while constructing the building, and Choi Sung-woo, president of the building and the gallery, decided to install a glass floor so that visitors could see what’s underneath them.

The second floor of the new Boan 1942 building is also a bookstore and gallery. The bookstore sets one theme a year, and chooses one book whose story is used to decorate the gallery space. The gallery and bookstore are connected to Boan Yeogwan next door with a bridge.

The two buildings, Boan 1942 and its sister Boan Yeogwan gallery, are works by Choi, who wanted to make a cultural platform where people can come and expose themselves to ideas and artwork that they do not have access to in their everyday lives. When he found an old motel called Boan Yeogwan, he decided to buy the building and two others nearby in 2007. Originally he planned to tear all the buildings down and then build a new big one. But it didn’t take too long for him to figure out that the building had a long history of being used as a gathering place for literary experts since 1942, including poet Seo Jeong-ju and novelist Kim Tong-ni. More recently, it was known to host busy government officials working at the Blue House until it closed down in 2004.

“I walked around Seoul every weekend for about a year and a half, and took pictures of neighborhoods that are disappearing as I was looking for a place [to build a cultural platform,]” Choi said.

At left is the gallery space at Boan 1942 and at right is the underground bar and library. [JOONGANG SUNDAY]

He saw the value of the old building that he purchased and decided to maintain its history. Choi even found an old Boan Yeogwan sign in a dumpster nearby broken into pieces and put it back together.

He gave up his grandiose plan to make a one big building, but decided to keep the motel and only tore down the other two to build what’s now Boan 1942. He worked with architect Min Hyun-sik.

“While many new buildings tend to stand out alone, I wanted this building to look like one that’s been there for a long time,” said architect Min Hyun-sik.

The Seoul Metropolitan Government also registered the original motel as a cultural heritage site. However, Choi sent out an official request two months ago that he wants the title to be canceled. He wanted the building to be able to continuously change.

“The idea is good, but the time might be taxidermied,” said Choi adding that the designation will hold the motel building back from being able to adapt to the present.

“The place is still in use nowadays and it is not stuck where [time stopped,] but reflects the cultural heritage of daily life. I don’t want it to be like a folk village, where certain items are stored in certain rooms that someone has used before.”