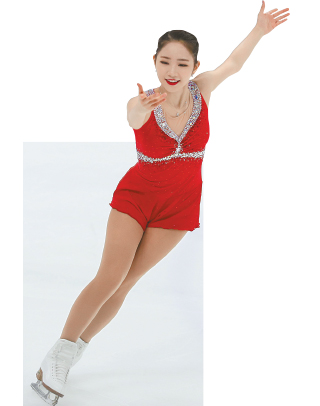 Choi Da-bin performs her free skate at the Figure Skating Korea Challenge, the first of three Olympic trial events at the Mokdong Ice Rink in western Seoul on Sunday. [YONHAP]

Teen figure skater Choi Da-bin won the ladies’ singles title in the first round of the Olympic trials on Sunday.

The 17-year-old scored 181.79 points combined from her short program and free skate at the Figure Skating Korea Challenge at Mokdong Ice Rink in western Seoul.

The Korea Skating Union (KSU) will hold another qualifying competition in December, and then the national championships in January will be the third and final event for Olympic hopefuls.

In the ladies’ singles, the top two skaters based on the combined scores from these three events will represent the host country at the 2018 PyeongChang Winter Olympics.

Choi was coming off a strong 2016-17 season, during which she became the first Korean to win an Asian Winter Games gold medal in ladies’ singles in February and earned two Olympic berths for Korea by finishing 10th in the world championships in April.

But Choi had a trying offseason. Her mother passed away in June from cancer, and problems with a new pair of boots limited her preparations for this competition, having only two weeks to train.

Choi admitted before the event that she had actually contemplated withdrawing. But once on the ice, Choi skated a clean short program on Saturday and followed that up with another strong performance in free skate Sunday.

Later in the program, she executed four consecutive jumps, capping off the sequence with a clean triple salchow.

Park So-youn, who was second after the short program, made several landing mistakes in free skate to finish sixth overall with 149.15 points.