Kim gets on base in Phillies debut

Kim gets on base in Phillies debut 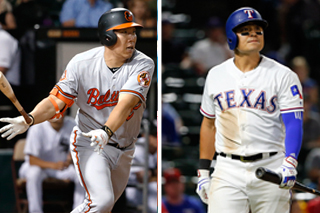 Left: Kim Hyun-soo of now the Philadelphia Phillies. Right: Choo Shin-soo of the Texas Rangers during a game against the Seattle Mariners. [AP/YONHAP]

Kim Hyun-soo made his first appearance with the Philadelphia Phillies during a game against the Atlanta Braves at Citizens Bank Park in Philadelphia on Monday. Though it wasn’t an outstanding debut, Kim was walked three times to help the Phillies win 7-6. With another victory, the Phillies are now in a five-game winning streak.

Though Kim got on base in all three appearances, his batting average went from 0.232 to 0.230. This was the first time that Kim was walked three times in a game since his major league debut in 2016.

“I think we added some pretty good arms and a good infielder, and you guys got to see Kim’s approach at the plate today; he’s got a pretty good, patient approach up there,” Matt Klentak, general manager of the Phillies, was quoted as saying by Delaware County Daily Times after the game.

Once Kim was traded by the Baltimore Orioles, who he made his major league debut with in 2016, the Phillies registered his name to the 25-man roster prior to their first game against the Braves on Sunday, but he did not make an appearance.

After playing ten seasons with the Doosan Bears in the Korea Baseball Organization (KBO), Kim signed a two-year, $7 million contract with the Baltimore Orioles. Though his contract ends this year, Kim struggled to get a higher scoring average against southpaws and has not yet shown his batting power, which is crucial for outfielders. In addition, he hasn’t shown outstanding defensive skill. With about two months remaining until the end of the season, Kim needs to prove his ability to the Phillies if he wants to remain in the big leagues next season.

Meanwhile, Choo Shin-soo of the Texas Rangers continued to get on base against the Seattle Mariners at Arlington Globe Life Park on Monday. Despite Choo’s performance, the Rangers lost 6-4 to the Mariners at home.

At the bottom of the first, as the Rangers’ first batter, Choo was walked to first base by Felix Hernandez. Choo was able to score a run later in the inning off Rougned Odor’s home run, who was second in the lineup.

Then, while the Rangers were leading 3-0 at the bottom of the second, Choo got on base by hitting off of Hernandez’s four-seam fastball at a speed of 145 kilometers per hour. Choo made two more appearances in the batter’s box, but grounded out in the fourth and was struck out in the ninth.

Playing as the Rangers’ first batter, Choo scored two runs, one hit and was walked once. With that, Choo maintained his batting average at 0.249 for the season.