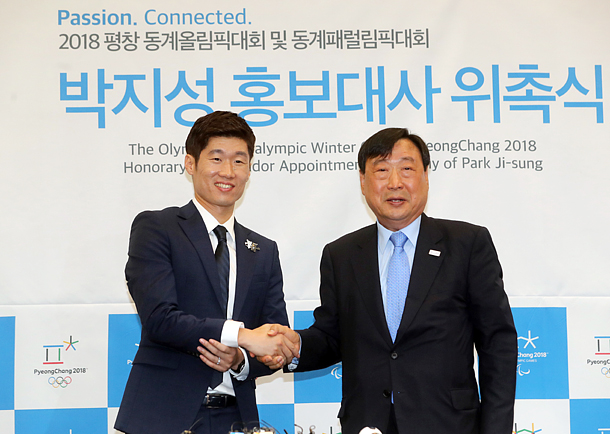 Korean football legend Park Ji-sung, the latest honorary ambassador for the 2018 PyeongChang Winter Games, said Friday he has high expectations for the first-time host in many different sports.

Park was one of Korea’s most iconic football stars until his retirement in 2014. He served as the national team captain and represented the country at three FIFA World Cups, scoring at least a goal at each tournaments. He won 100 caps for Korea, making him one of nine Koreans in the century club. Park is also the first Korean to play in the English Premier League (EPL).

Park said he understands the role of a major sporting event in galvanizing an entire nation, as he had a first-hand experience of this at the 2002 FIFA World Cup that Korea co-hosted with Japan.

“I am glad to have this opportunity to contribute to PyeongChang’s efforts,” Park said. “I am grateful for the opportunity to return the love and support I received as an athlete.”

But Park noted Koreans in other winter sports have made strides of late, and he is looking forward to watching many different events in PyeongChang.

“In figure skating, we have some young athletes coming up, and it’ll be interesting to see how they do in PyeongChang,” Park said. “The national hockey teams have done well of late, and our bobsleigh teams have been battling against the odds. Overall, I think we’re doing better across all winter sports than in the past.”

After three seasons in the Netherlands, Park joined Manchester United in 2005, becoming the first Korean in the EPL. Park enjoyed his best years with the Red Devils, winning four EPL titles, the 2007-2008 UEFA Champions League and the 2008 FIFA Club World Cup.