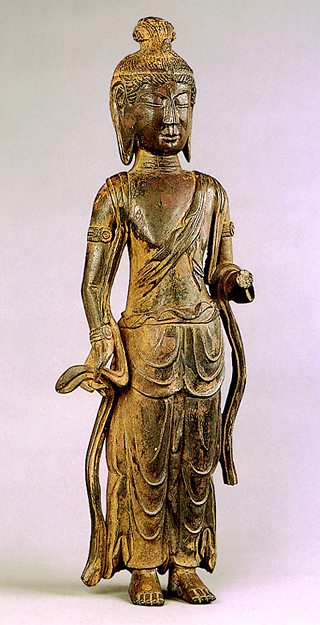 The statue displays the style and characteristics of bodhisattva images prevalent during the Unified Silla Period (676-935).

The pedestal on which the statue is supposed to stand, the crown, and the left hand are gone.

The head is disproportionately large, with usnisa (a protuberance symbolizing supreme wisdom) displayed atop the head. The parts right below the eyes are noticeably longer than those above the eyes, making the entire face look rigid.

The right arm holds one end of the two parts of the robe flowing diagonally down to the arms.

The wrinkles of the lower part of the robe are portrayed in U-shaped lines with a refined technique. Other Bodhisattva images made during the Unified Silla Period include the Stone Standing Maitreya Bodhisattva (National Treasure No. 81) of Gamsansa Temple, Gyeongju, made in 719 (18th year of the reign of King Seongdeok) and another Stone Buddhas in Four Directions (Treasure No. 121) at Gulbulsa Temple Site, Gyeongju, made during the mid-8th Century.

Overall, the well-proportioned body looks soft, but the portrayal of the face and the body gives a rigid impression.

It was presumed to have been made during the late 8th Century.