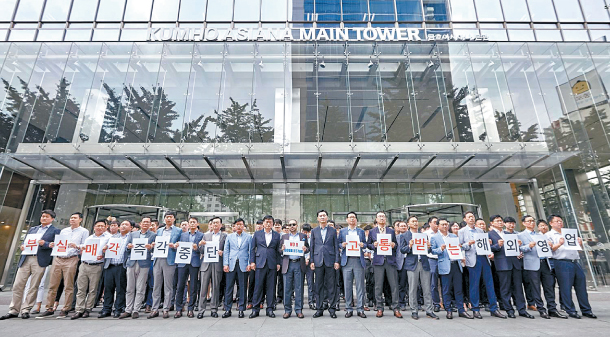 Employees of Kumho Tire and representatives of foreign dealerships hold a silent protest against the sale of the company to Doublestar, a preferred bidder from China, on Tuesday at the company headquarters in Gwanghwamun, central Seoul. [YONHAP]

About 100 people gathered in Gwanghwamun, central Seoul, on Tuesday morning to hold a silent protest against the sale of Kumho Tire, a beleaguered tire maker on the verge of sale to a Chinese buyer.

The protest, which took place in front of the company headquarters, included not only Kumho Tire employees but also representatives of foreign dealerships that sell the tire maker’s products.

The employees purported that the potential forced sale of Kumho has already created unfavorable work conditions while representatives of dealerships said it will undermine the brand’s sales overseas.

One representative of a tire dealership in the Middle East said the sale of Kumho Tire to Doublestar, a Chinese tire maker and currently the preferred bidder for Kumho, will undermine the value of the brand and may lead customers to shun its products.

Kumho Tire’s sales tanked in the first quarter this year, down 4.6 percent year on year. The company posted an operating loss of 28.2 billion won ($25.1 million), the first time that the tire maker has been in the red for a quarter since the third quarter of 2015. Sales from overseas - which covers major markets around the world including China, North America and Europe - reportedly fell by nearly 11 percent in the first quarter.

The rally on Wednesday is the latest in a series of protests against the potential sale.

Last month, a series of protests took place in South Jeolla, where the company’s manufacturing plants are located. Workers from the tire maker’s factories in Gokseong and Gwangju, as well as lawmakers at the National Assembly and local universities, are also raising their voices against the sale. Opponents of the deal worry that the Chinese company may close down the factories in Korea, which would deal a heavy blow to the local economy.

The Korea Development Bank, which leads the group of Kumho Tire creditors, recently agreed to a proposition made by Park Sam-koo, the chairman of Kumho Asiana Group and de facto head of Kumho Industrial. Park demanded 0.5 percent of the annual sales of the company for 20 years. While Doublestar agreed to a 0.2 percent brand fee, the creditors have reportedly agreed to cover the 0.3 percent difference.