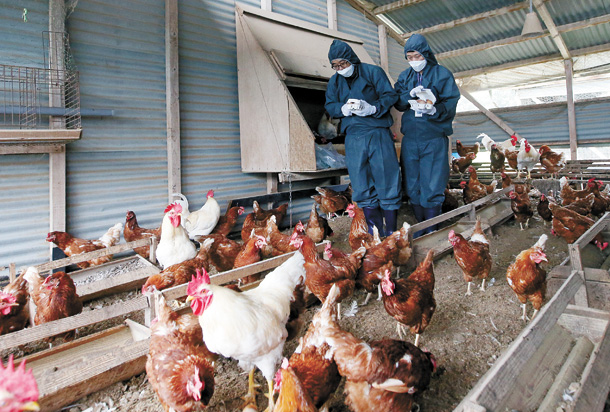 Officials of the Ministry of Agriculture, Food and Rural Affairs collect eggs at a poultry farm in Hwaseong, Gyeonggi, on Tuesday in an ongoing government inspection of poultry farms with more than 3,000 birds to determine if any more eggs have been contaminated. [YONHAP]

After a scare over pesticide-contaminated eggs from two farms in Gyeonggi, some consumers are refusing to eat eggs from the province.

“The eggs I bought a few days ago are marked on the shells with number ‘08,’” a user posted in an online community on Tuesday. “Do you think it’s safe to eat?”

Within an hour, the comment had dozens of replies.

“The number ‘08’ means they were produced in Gyeonggi,” wrote one user in reply to the post. “Do not eat the eggs and ask for a refund.”

Eggs produced in Korea are marked with numbers to indicate their region of origin, ranging from “01” for Seoul to “17” for Sejong.

Fipronil kills mites and ticks but is banned by the European Union from use on animals that produce food for humans. The World Health Organization said fipronil is “moderately toxic” and can damage the liver, thyroid glands and kidneys if consumed in large quantities. The U.S. Environmental Protection Agency has named bifenthrin a possible carcinogen.

Some major retailers, including Emart, Homeplus and Lotte Mart, stopped selling eggs from Tuesday after the Ministry of Agriculture, Food and Rural Affairs called off further production of eggs from Tuesday to Thursday, while it inspects all poultry farms with at least 3,000 birds. Gyeonggi has 237 such farms.

The retailers said the measure is a preventive one, in case government inspection identifies more farms with contaminated eggs.

But some consumers are not taking any risks.

“They say they found pesticide on the eggs, so I’m not going to eat any I’ve already bought,” said Kim Sun-hae, a 45-year-old woman. “I’m going to throw them all out and wait for the government inspection’s results.”

“I’ve been ordering eggs at an organic poultry farm,” said a 31-year-old pregnant woman surnamed Lim. “I’m not going to eat any eggs until the government results come out.”

Europe was riddled with the same problem from July.

Authorities on the continent pulled millions of eggs off shelves after traces of fipronil were found on eggs produced in the Netherlands and Belgium.

“What if all the eggs I have been eating so far had pesticides on them?” said a 33-year-old man surnamed Seong. “I rely on eggs a lot in my diet.”

The ongoing government investigation into poultry farms also has some farmers on edge.

“I’m hoping that the government will allow us to put the eggs on the market once it confirms the eggs at my farm are not contaminated,” said Ha Byeong-hoon, a 70-year-old poultry farmer in Pocheon, Gyeonggi. His farm has 120,000 chickens.

“Pesticides like fipronil and bifenthrin are sprayed usually on the outer side of the hennery to kill ticks or lice on chickens, and if we don’t use the pesticide, the chickens may die,” he added. “The government should not only clamp down on the use of these pesticides but come up with healthy measures to help farmers fight the insects to keep the chickens alive.”

Farmers are also concerned about the drop in consumption of eggs over the pesticide scare.

“I’m not worried about the government finding traces of pesticides in my farm, but that people will stop buying eggs now because of the general scare,” said Ahn Young-sik, a 60-year-old farmer in Gangjin County, South Jeolla. His farm of about 90,000 chickens produces roughly 30,000 eggs a day. South Jeolla is home to 89 poultry farms with at least 3,000 birds.

“I can store the eggs in the fridge until the government test results come out, but consumers are now afraid that eggs may be contaminated,” he said. “And even if big supermarkets start selling them again, people will not be buying them for a while.”

“My farm supplies eggs to supermarkets, but with the current government red-light on egg production, I don’t know what to do with the eggs,” said a poultry farmer in Gangwon, where there are 87 poultry farms with at least 3,000 birds. “The farm’s refrigerated warehouse has only enough space for two days’ production of eggs. After that, I will not have any space left in the warehouse and will have to throw away eggs.”

Also concerned are small store owners who rely on eggs.

“I run a breakfast diner place in Sillim-dong, southern Seoul, and eggs are irreplaceable for my breakfast menu,” said a 44-year-old surnamed Moon. “The past avian influenza scare led to price hikes on eggs, and now with another egg scandal, just this morning I couldn’t find eggs to make food for customers.”

“My bakery has not been faring well since the avian influenza scare,” said Jo Gye-seok, owner of a bakery in Sillim-dong for 35 years now. “I’m going to have to cut down on producing baked goods that use lots of eggs like sponge cakes for a while.”

For now, the government is working to identify the cause of the problem and complete its inspection as soon as possible.

“We suspect the problematic farms found with traces of pesticide on the eggs failed to clean the pesticide off in the production process,” said Kim Jae-hong, head of the business policy department of the Korea Poultry Association. “The most we can do is hope that the government inspection is carried out swiftly with good results to address the consumers’ concerns.”